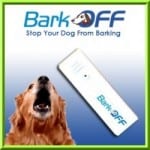 Whether your dog has a high-pitched yelp or an authoritative bark you may have considered Bark Off. The television commercials make it seem like the best thing since sliced bread.

Overview
A dog that barks when they’re not supposed to can be pretty annoying, and one of the harder habits to break. Several products on the market promise to get rid of this annoying habit with the use of small but effective electric shocks that will zap your dog when they bark. Getting zapped enough times will cause them to link their barking with the jolt, and eventually condition them to stop barking.

Or so the theory goes.

The Claim
If you use Bark Off your dog will not bark anymore. With their “ingenious” ultrasonic technology it allegedly disrupts the barking cycle so your dog doesn’t want to bark anymore. The ad shows beams of ultrasonic radio waves being emitted into the room, and the dogs immediately stop themselves.

The problem with this claim is that you’d have to believe that a cheaply made product like this actually has the technology to know when your dog is barking and turn itself on. What is more likely the case, based on dog owners reporting their dogs behavior when they use it, is that it continually sends out the signal when it’s switched on.

The Hype
The hype comes in the form of their chintzy commercial that shows dogs not barking when the device is turned on, and that says it’s a humane way to get your pet to stop barking.

The Cost
Bark Off is one of those products that is priced so low that it’s tempting to try it just to see if it works. On TV it had a get 2 for $10 plus shipping and handling offer. It referenced other bark prevention devices costing around $70, and this is fairly accurate.

It’s currently being sold on Amazon for $4.95. Being battery powered you have to immediately see that the quality can’t be what they claim it to be. It should at least be something that you’d plug into the wall, or have a lithium ion battery that can be recharged, like an iPod or a cell phone.

The Commitment
Turn Bark Off on when you don’t want your dog to bark, that’s all you have to do. It is items like these that have almost zero commitment involved that lead people to buy it almost instantly. This is one of those products that is bought on a whim, tried out, and tossed in the garbage heap along with all of the other faulty products that get sold on TV.

Evaluation
What really seems to be going on based on a plethora of consumer reviews is a constant stream of what can only be imagined as a ear-splitting racket for dogs. So instead of you being constantly bombarded by barking, your dog will be constantly bombarded by Bark Off. This is not a fair trade and leaves no one satisfied. As a responsible pet owner and presumed dog lover you should get no satisfaction from using Bark Off, even if it did work in stopping your dog’s problem barking.

Does Bark Off Really Work?

No, Bark Off does not work. In fact, it can be dangerous for your dog to use it, and is inhumane. The temporary effectiveness of the product could be due to shock and confusion on your dog’s part when they hear the sound coming from the device. Since humans cannot hear it, and since we have no idea how a dog’s sensitive sense of hearing hears sounds, there’s no way we can imagine what an ultrasonic blast sounds like to them.

Our Recommendation
Dogs are man’s best friend, and therefore we should treat them as such. If your dog is a problem barker you can fix this humanely and safely with the help of a certified dog trainer. You won’t be able to buy this solution at Amazon for less than $5 but it’s the best thing you can do for your dog.

What do you think? Does Bark Off really work?

← Previous Is Curves for Women Better then a Normal Gym?
⚅ back to blog
Next →Will Dime Curves Actually Give Me a Bigger Booty?

22 Customer Reviews on “Does Bark Off Work to Stop Annoying Barking?”