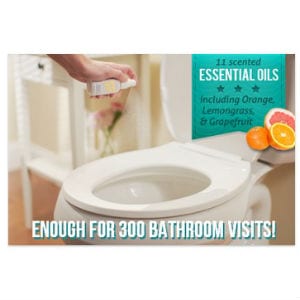 Bathroom Secret is a spray that you spray before you go to the bathroom, so that no one has to know that you went number two. This would come in handy in times when you’re using a friends bathroom or the office bathroom, and you really need to stink things up. But does it work?

Overview
This is one in a long line of preventive odor removers where you’re actually trying to make the odors gone before they ever show up in the first place. The concept is that if you can stop the poop from smelling things up in the first place it’s a much better system than trying to deal with odors that have already had a chance to permeate things. If you’ve ever been victim of the long lasting and lingering smells of a serious bathroom session, you’ll appreciate the idea of never having to gag on that again.

The Claim
The makers of Bathroom Secret say that with two or three sprays you’ll have coated the toilet water with a blend of essential oils that ends up trapping the fecal matter under the water so it doesn’t eliminate its odor through the entire bathroom.

The Hype
The hype is that we all go, so it’s really nothing to be embarrassed about, but at the same time if you could go without leaving the odorific remnants behind it would be preferable.

The Cost
The cost of Bathroom Secret is listed at $10, but keep in mind that you’ll have to pay shipping on that as well. You might be able to find similar products either offline, or at an online retailer that won’t gouge you on the shipping costs of little spray bottles like this. It does rank as average among other products of a similar nature, so the price alone is not worth not buying it.

The Commitment
This is where you’ll have to have a bit of forethought, because you’ll have to remember to use this before you go and before the damage has been done. If you forget to use it before you go, it is rendered pretty much useless, as essential oils aren’t really the best air fresheners. If you forget you’re better off just using an air freshener like Febreze or something just as good.

Evaluation
There have been several of these products to hit the market recently, including Just a Drop, where you drip a drop of it into the toilet, and Sneak a Poo, which is essentially the same exact product, also in spray form. It seems that there is a big market for this, and you can tell that people really care about smells by taking a trip down the air freshener aisle of any grocery store. It’s big business. But can a pre-use product like these do the trick? Let’s see in this video review:

A review on a similar product:

As you can see by the review above, these pre-going odor eliminators work to some degree, but not to the point where you can’t tell that anything happened. Perhaps a combination of a before spray plus an after spray would do the trick, minimizing the odors that do occur, and then dealing with them after the fact as well. Febreze works wonders in this department, with a patented system of covering up the odor molecules with Febreze molecules so your nose can’t detect the odor.

One thing to keep in mind is that sprays like these can be used in your own home, not just while on the go or in someone else’s home. Getting into the habit of using it every time you go will help you remember to use it when you’re out and about.

The final verdict on Bathroom Secret is that you can safely pass on this one, as there are better product available at better prices. Consider Just a Drop which gets pretty good reviews and uses a drop format instead of a spray so that it has a better chance of actually coating the top layer of water in the toilet. But even this has gotten some people that say that while it might reduce the odors, it doesn’t eliminate them completely, so always have your backup ready.

Our Recommendation
When it comes to using the bathroom in socially awkward situations, there’s only so much you can do. A one-two punch of using a pre-product like this to prepare the toilet for what’s about to happen, as well as using an air freshener when it’s all over, is the best method we’ve found to date. Keep in mind also that if you’re following a proper diet and have a clean and functioning colon your feces is supposed to be coated with a layer of mucus so it’s not supposed to smell.

What do you think? Does Bathroom Secret work or not?