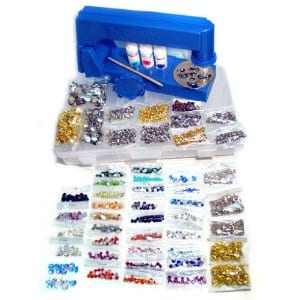 The BeDazzler really took the arts and crafts world by storm, giving just about anyone the ability to jazz up a boring item with some razzle dazzle. There’s reason to be skeptical on this one, because there’s a lot of room for error, so we set out to answer the question of does it actually work, and we found our answer.

Overview
When done right, rhinestones and studs on clothes can look great. When done wrong you’ve wasted your time and perhaps a piece of clothing. The concept here is that you’ll be able to take perform this task pretty easily, and create eye-catching designs that people will admire.

The Claim
The folks at BeDazzler claim that their kit comes with everything you’ll need in order to make fashionable clothes and accessories. In addition to the obvious t-shirts and jeans, they say it can be used on shoes, belts, dresses, as well as for scrapbooks. The stapler design is supposed to make the process easy and effortless, as opposed to the traditional ways of affixing rhinestones to clothes which can be messy, tedious, and hard to get right.

The Hype
The television infomercial is the cause of all the hype for this unit, showing people using it to create pretty impressive clothing items that you’d actually want to wear in public. The thought that gets implanted in the brains is that if you just buy the machine you’ll be able to replicate those same styles, with little effort on your part. The ad also does a good job of creating the desire to jazz up your clothes, if you didn’t already want to do it.

The Cost
The BeDazzler is advertised at the common TV price of $19.95, but don’t forget about shipping and handling on both the main unit and on the “bonus” mini BeDazzler. The total will come to $36 when it’s all said and done. This is a classic way for companies to inflate the purchase price, and even if you take them up on their 30 day money back guarantee, they’ll still come out on top because it doesn’t cost $16 to ship this kit.

The Commitment
The point of this machine is that you’ll be able to quickly and easily dazzle up your clothes, giving new life to some older clothes, or sprucing up items that are somewhat ho-hum. So in theory it should save you time and money, but that’s only if it works as depicted in its promo ads. If you’re into arts and crafts you’d likely have enough ideas on what to use this for, but if you’re hoping that it will inspire creativity, you might find that it collects dust in a cabinet.

Evaluation
Good luck trying to get any kind of consistency with this machine. It has some inherent flaws that prevent the typical user from using it the way it’s intended. Most users complain that it’s misaligned. With alignment between the base of the unit and the plunger being the most important part to get right, this is pretty much a deal breaker for most. Another common complaint is that it’s made entirely of plastic, which means they tried to cut as many costs as possible, and it’s probably made for a few pennies overseas.

In order for this product to be considered a success, it would have to perform as expected, with very few flaws, and almost everyone saying that it works great and they were able to use it without a hassle. Instead we’re seeing the opposite, so it’s not worth risking your clothing items on, or your time, and look for other options that might be able to give you the results they promise. And since most people go in with high expectations it’s a good idea to lower them a bit if you do decide to try it.

Unfortunately the reviews are pretty unanimous on the BeDazzler being cheaply made, and not providing enough instructions to be able to use it. It’s getting the Thumbs Down from us and ends up in the pile of TV products that have a good concept but skimp on the manufacturing process to increase profits. It’s a very short-sighted way of going about it, and if they would have just made it better it would have enjoyed lasting success as the go-to rhinestone and stud setter.

Our Recommendation
Don’t worry if you’re still bent on affixing rhinestones and other add-ons to your clothes. We found a handy-dandy wand that does the same thing, but actually works. It’s got a long name, the Darice Rhinestone Setter Hot-Fix Applicator Wand, but a small price at just around $11. The reviews on this are very positive, and instead of being lost on how to use it you’ll be up and running just as fast as can be.

What do you think? Does BeDazzler work or not?

← Previous Does Mavala Stop Really Work?
⚅ back to blog
Next →Does the Spin Around Organizer Really Work?