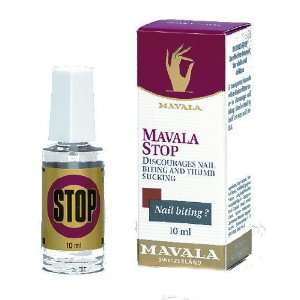 Mavala Stop has emerged as a standby when it comes to treating things like nail biting and thumb sucking. It’s simple to use, and the concept is straight up: you won’t bite or suck if the taste is awful. But does it really work as well as they say?

Overview
It’s best to treat nail biting and thumb sucking early, as they each can linger on too long and be socially awkward, or lead to being an adult nail biter. Severe dental problems can occur from prolonged thumb-sucking, and if nail biting gets carried away it can lead to infections, deformed fingernails, stomach problems, and can help contribute to the spread of contagious diseases. There are plenty of reasons to knock these habits out before they can solidify further and become a bigger part of the identity.

The Claim
Mavala Stop claims to be able to stop annoying and ingrained habits in a matter of days. It says that within 10 days of use your nails should have grown in to their natural, healthy state and you’ll have to start using strengthener because they be weakened due to so much previous biting.

The Hype
Nail biting and thumb sucking are some of the two most common habits, and many adults still struggle to overcome the habit of biting their nails. This product appeals to a wide range of consumers, both parents of thumb suckers and nail biters, and adult nail biters as well. With the positive feedback it’s getting there is a buzz surrounding it and it could be come the default way to treat these two unwanted actions.

The Cost
You can get this on Amazon for $11, a small price to pay to reclaim a set of healthy nails, or to avoid future orthodontic bills later. For those that have been searching for a way to stop biting their own nails, or parents that can’t convince their child to stop biting their nails or sucking their thumb, this is priced at a point that merits a trial run.

The Commitment
What’s nice about this product is that you don’t have to keep remembering to reapply every few hours, or even every day. The directions say you can use this every other day, that’s how powerful and effective it is. If you’re using this for nail biting then you will now have to commit to clipping and styling your nails, something you might not have been able to do if you always chewed them down before they could grow in.

Evaluation
It’s rare to find a product with such universal acclaim, and every third party site that sells this has tons of glowing reviews for it. The accounts are coming in from all sorts of situations, both parents with children that suck their as well as adults who have been biting their nails for decades. Of course in any sampling there will be those that go against the norm, and that’s what we’re finding here with a small percentage of users saying it didn’t provide the results that everyone else is reporting.

Mavala Stop has been referred to as a harmless way to stop thumb sucking and nail biting, but some parents say to use it with caution because too much can lead to adverse reactions like gagging and vomiting. It’s quite possible to use too much of this, and the directions say to coat the entire nail. Many reports say that only putting on the tips of the fingernails or thumbnail is enough to get the job done. Some have also raised concern about the ingredients, and caution against its use in young children. Others retort that the positive long-term benefits would outweigh the short term exposure.

The overwhelming majority say that Mavala Stop does in fact work. There are of course a small minority that say it didn’t work for them, and also some that challenge the notion that it’s safe for use in children. One trend that we did see was that if your child has a really bad thumb sucking habit and is determined to keep up with it, they may not be deterred by the foul taste and would end up with the chemicals in their mouth for long periods of time.

Our Recommendation
You have to size up the costs versus the benefits here. Thumb sucking can do damage to the teeth and gums that are still developing inside the mouth. Nail biting rarely escalates to a more severe problem. If you’re worried about the ingredients it contains, it’s best to find an alternative strategy. But if you are dealing with a mild case of either habit, this should do the trick for stamping out this negative behavior and causing a negative association with it to prevent future regression.

What do you think? Does Mavala Stop work or not?

← Previous Does Olay Regenerist Really Work?
⚅ back to blog
Next →Does BeDazzler Really Work?