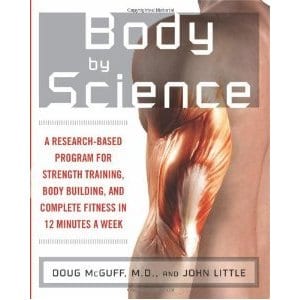 Body by Science is a book that promises to show you how to lose weight using scientifically proven principles. This should be a breath of fresh air for those that have been steeped in books and magazines all trying to tell you the “right” way to lose weight and get fit. So we looked at what it is proposing, and the approach they’re taking, as well as what users are saying about the results they’re getting.

Overview
Taking a scientific approach to weight loss sounds like a good idea because it would help avoid the fad diets and gimmicks that many of today’s trends are known for. While some dietary programs follow methods that have stood up to scientific testing, many times people will be lured into a diet that is so new it doesn’t have any corroborating evidence behind it, and no long-term studies to vouch for it. The world of exercise and fitness is always claiming to be on the cutting edge of what we’re learning about the human body, but what do we really know?

The Claim
Body by Science puts the focus on strength training and exercise, but doing it the smart way so that you’re only spending one day a week on it, rather than getting daily exercise, or three times a week like many health gurus recommend.

The Hype
Any time you involve science, or even hint at being scientifically proven, you are adding some hype to your product and inviting a debate as to whether or not there really is scientific proof to what you’re saying. There’s also the possibility of taking advantage of the general public’s overall lack of scientific knowledge, since many people will not be able to confirm or deny the claims being made, or verify any of the research that has been done.

The Cost
The Body by Science book is for sale on Amazon for less than $14. They also have a question and answer book that you can buy as a supplement to the original book that goes for $25. There is a lot of information provided for free on their website as well, including videos featuring the authors explaining particular points of the book, and answering questions from readers. There are also articles on nutrition and fitness that you can get started with before deciding to get the book.

The Commitment
With science on your side you might think that you are getting off easy, but you’ll still have to put in some time and effort to make the changes necessary to see the results. By cutting out all the things that don’t work, as well as the things that are potentially dangerous for you, you’ll cut the learning curve down dramatically and you should be able to start seeing results more quickly than if you go at it on your own, or if you’re following a system that is leading you down the wrong path. You can have peace of mind knowing that research is backing your actions.

Evaluation
Those that have read and followed the advice given in Body by Science have said that they were pleased with their overall results, and glad that they read the book. When it comes to losing weight and building muscle what usually happens is there will be a large divide between those that say it works and those that say it doesn’t. Almost everyone is in agreement that the information provided is helpful on some level, and the fact that it provides references and cites studies is something that separates it from any other fitness books on the market.

Some have pointed out that the book might have an author’s bias to it, since they recommend Nautilus equipment and spend a good amount of time citing research studies that show the benefits of using exercise machines rather than free weights. Since they advocate doing intense exercise that heavy loading up more weight than you can handle, it makes sense to us this sort of equipment because you can push yourself past your limits without the need of a spotter.

Body by Science is getting our Thumbs Up review, because they saw a need and filled it. There was a dire need for a research based diet and fitness book to come along, and even if you don’t find yourself using the exercise program they recommend, it’s still worth the time it takes to read it so you can dispel some rumors and have a clear head about how to strategically go about getting fit. They could quite easily hype this up and try to get people’s attention by saying you only have to work out once per week, but their claims are understated and they seem to over-deliver.

Our Recommendation
They say that in the land of the blind the one-eyed man is king, and if you feel like you’ve been led astray by some of today’s health and fitness “professionals” you might find solace in a book like this that brings in a healthy dose of science-based research. It may get a little technical at times, but overall the authors have done a good job of keeping it understandable by a larger audience. At the very least it can give you a foundation to work from, and you’ll be able to spot dangerous workouts and ineffective diets on sight without having to try them first.

What do you think? Does Body by Science work or not?

← Previous Does the Tagg Pet Tracker Really Work?
⚅ back to blog
Next →Does One Source Talent Really Work?

7 Customer Reviews on “Does Body by Science Really Work?”