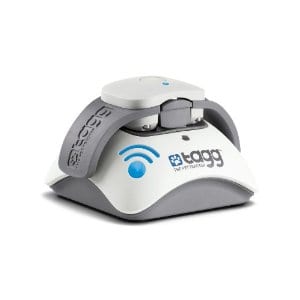 Tagg says that it can help locate your dog or cat if they ever get too far from home. It was only a matter of time before a company started tracking pets using GPS and other signals, and it definitely would make sense especially if you’re little buddy is prone to getting loose, and you’ve played the seek and find game one too many times. So how well is it working for real owners?

Overview
The statistics are pretty alarming when you look at them, with a third of pets getting lost in their lifetime and most of them not getting found once they get lost. Giving your dog the proper ID is one way to make sure that they stay yours if found, but it’s a pretty passive way to go about finding your dog or cat. Putting fliers up around the neighborhood is a 20th century way to go about things, and with today’s technology we can track things pretty reliably via GPS and WiFi signals, so it’s best to use the technology that’s available to you.

The Claim
Tagg claims that it can track your pet accurately enough so that you can drive right to where they are and pick them up. They say that you can also track your pet’s activity from your computer, either at work or at home, getting a better idea of what they’re up to during the day. It can even help you keep your pet more healthy, because you’ll have an objective look at how much exercise they’re getting on a daily basis, so you’ll know when they’re overdue for a walk.

The Hype
They’re currently running a television ad campaign which will get some attention, but really what’s at play here is the emotions of pet owners. That pit in your stomach when your pet goes missing is something that most of us would go to great lengths to avoid, and the peace of mind knowing that they’re traceable in that event is enough to get people to try this out. Any time a product tries to sell peace of mind there’s the element of fear that they’re playing on, in this case the fear of losing a beloved pet, which is a subtle form of hype.

The Cost
The unit goes for $100, which sounds reasonable, but after three months there’s an $8 monthly fee if you want to continue using the service. If you discontinue payment you won’t be able to continue to track your pet. As a comparison, the nearest competing product is the Garmin GTU 10, but that gets spotty reviews and costs a little more, with an optional deluxe plan that you can add to it for $5 a month.

The Commitment
Once you have this set up there’s really not much that you need to do as far as daily upkeep. It comes in handy in the event that they get loose and then goes back to being pretty maintenance free. Setting it up seems simple enough, and you’ll just have to charge it up when the battery runs out. Users have reported that the battery life is one of the positive features of the device, so you won’t have to charge it as often as other systems.

Evaluation
Most of the feedback for the Tagg system has been positive, with the majority of users saying that it works as described, and even relaying stories about how it helped them find their lost cat or dog. Compared to competing products it seems to be more accurate and reliable, as well as lighter in weight and easier to attach to your pet. From what we could determine it seems to be the leading pet tracking device on the market, with an overall satisfaction rating that trumps other units.

The biggest complaint seems to be about the monthly fee, which agitates many users and seems unnecessary to many. This is supposed to be for the ability of the system to send you alerts if your pet leaves a pre-set perimeter around your home. This can be a good feature for some, but others might not think that it’s worth almost $100 extra a year, and some have pointed out that you’d only use this feature a few times a year with normal circumstances, so they feel that it’s not the best deal.

The Tagg pet tracking system definitely works, and is able to get your pet’s whereabouts accurately enough to locate them easily if they should ever get away from you. The biggest thing you’ll have to determine is whether or not you feel OK with the monthly service fee. Aside from that it’s up to you to get the most out of this. Try to use all of the features, set up the perimeter so you can get text and email alerts the moment they stray, and track their daily activity so you can keep them in peak condition.

Our Recommendation
They say that having the chip implanted in your pet isn’t enough, because that simply gives the ownership information for your pet. If you want to take matters into your own hands and take proactive action to find them before anyone even knows they’re lost, this is the way to go. If you only use this once in your pet’s lifetime it will be money well spent, and if you utilize all of the features it has the monthly fee seems more reasonable.

What do you think? Does Tagg work or not?

← Previous Does Internet TV Really Work?
⚅ back to blog
Next →Does Body by Science Really Work?

2 Customer Reviews on “Does the Tagg Pet Tracker Really Work?”