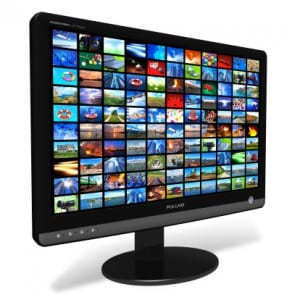 Internet TV sounds pretty tempting, being able to get thousands of channels for free on your computer. With the high prices that come with cable and satellite subscriptions it’s a way to have everything at your fingertips and ready when you’re ready to watch. But what we’ve found is that in most instances it’s just a big scam, and after much searching we’re skeptical to the idea.

Overview
The promise of free TV channels dates back to the dawn of cable, when people tried to to get free cable from the cable guy, or free satellite TV set-ups that include all of the channels, even the premium ones. There’s just something about getting free TV channels that speaks to us on a primal level. Perhaps it’s because we feel that if we have to sit through the commercials we shouldn’t have to pay for it. Or it might just be a way to get a one up on the cable company that’s been collecting from us all these years. Whatever it is the desire is strong for free shows and movies.

The Claim
Internet TV sounds plausible, since the state of technology we’re in makes people believe that there’s live streams of cable available somewhere. But many of the claims say that you can tap into thousands of free channels on demand, tune into your favorite TV shows, all sorts of sporting events, as well as movie channels. For the entertainment junkie they make it seem like you’ve hit the mother lode, and it’s very tempting to want to try it.

The Hype
There have been several attempts to make it seem like this is a legitimate product or service with flashy websites that make it seem like the real deal, but at the end of the day it’s mostly about selling the idea of having all of your favorite channels available for free without having to subscribe to a cable or satellite plan. It’s all fluff, and one of the biggest signs is that they’re unable to show you a sample of the kind of programming you can receive.

The Cost
The major draw of Internet TV is that it’s either free or it’s a one-time charge for software that connects you to thousands of free channels. Either way it’s a no-cost or one-off cost and then free after that. This is in direct contrast to having to pay for cable or a satellite dish, and the something for nothing feeling is what people are most drawn to. Many of the offers come with money back guarantees which makes it easy to try them out and then request a refund after you see what sort of channels you really get.

The Commitment
Another promise of sites that offer free TV over the Internet is that the process will be very easy for you, and all you’ll have to do is channel surf in a similar fashion as your regular TV set. The software usually will give you a wall of playing channels and you simply preview them and choose the one you want to watch.

Evaluation
There are several different offers for Internet TV out there, but each of them is roughly the same. The lure of thousands of channels gets people to spend upwards of $20 or more to try it out and see what it’s like. What is very obvious as soon as you download them is that it’s not the way it’s advertised on the pitch pages. If you try and download free software you have to worry about viruses, adware, scumware, and more and it’s definitely not worth ruining your computer over.

Even the legit sites that you pay a monthly fee to can buffer if your connection isn’t super fast, so the other drawback to many free TV channel providers is that they don’t load as fast as you’d want them to. This is because they’re often hosted on sites that aren’t very big, or are hosted on a server that is located abroad. Since it’s free you can’t really complain about the quality, but for most people getting channels that aren’t very interesting and that are choppy is not very entertaining.

Internet TV is more hassle than what it’s worth, and nothing like what it’s portrayed to be. Most of the software systems you can buy that promise thousands of channels are just aggregating free streams that can be found online for free, and are not channels that most people would want to watch. Many of them will be akin to public access channels, and in a different language than English. It might be fun as a novelty, but it doesn’t come close to offering the same caliber shows and sports that you’re likely looking for.

Our Recommendation
Stay level-headed on this one and realize that there’s not a great way out there that you can get TV for free using the Internet. You can come pretty close and stay legit with services like Netflix and Hulu, but you’ll have to pay a small monthly fee and sit through some commercials if you go with Hulu. There are also some interesting services like Miro that are free and open source and are trying to be an all in one torrent downloader and media player, which using its maximum capacity might seem like it’s free Internet channels.

What do you think? Does Internet TV work or not?

← Previous Does De Odor Works Really Work?
⚅ back to blog
Next →Does the Tagg Pet Tracker Really Work?