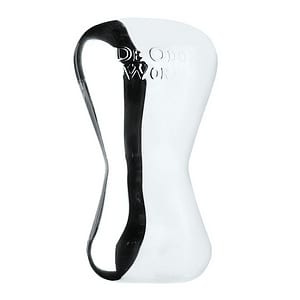 De Odor Works is a way to keep yourself smelling good without resorting to using deodorants and antiperspirants. It looks strange when you first see it, perhaps like a remnant from the T-1000 model from Terminator 2. It only needs water to activate it and is made out of a special stainless steel that is supposed to kill the bacteria that is responsible for the odor. But how well does it work in real world trials?

Overview
The risks of using deodorants that you find on most store shelves is twofold: your body is supposed to sweat and most deodorants also act as an antiperspirant, and the chemicals that are contained in them are repeatedly placed onto the skin, and easily absorbed into the body. The risk that gets the most attention is the possible link of deodorants to breast cancer, which has many women making the switch from their traditional sticks to alternative methods of controlling odor.

The Claim
De Odor Works claims that it works as well as deodorant without the use of any harmful chemicals, and without the need to use anything else besides their stainless steel unit and water. They do make the point that sweat by itself doesn’t have an odor, and that it’s the bacteria that’s in the sweat that is causing the smell. Further evidence can be experienced by a smell getting stronger over time, even if no more sweat is added to the equation. You can sweat once and if left uncleaned it will end up smelling worse and worse as the bacteria multiply.

The Hype
It was featured on the Dr. Oz show, which has proven to be a one-man hype hour leading people to research all types of health products. He’s got a way of making a product seem new and cutting edge, and since he mixes in a lot of credible information with a long line of endorsements, it’s hard to determine what to believe and what not to. Most assuredly if he’s mentioning a product by name he’s going to get some sort of payment in return.

The Cost
It’s $30 for the De Odor Works bar, and since it’s reusable it’s a one-off purchase. Depending on how fast you go through deodorant it’s going to take a while for it to pay for itself. For example if you pay $3 to $4 for a stick of your regular deodorant you’d have to use between 7 to 10 sticks just to break even. If you order it through their official site they have a 30 day money back guarantee on it, which should be plenty of time to determine if it works.

The Commitment
This definitely requires some getting used to, as it’s not applied the same way that deodorant is, and it involves adding a step to your shower routine. Even though they try to make it seem like an easy thing to do, for most people it doesn’t feel very natural, and it definitely takes more time than using traditional deodorant does. Of course you can expect to make a few trade offs if you’ve committed to getting rid of your usual deodorant for health reasons.

Evaluation
Pitting De Odor Works against deodorant like Speed Stick or Degree isn’t really a fair fight, but it’s the comparison that they bring upon themselves. It’s really hard for a product that doesn’t provide its own scent to compete against products that are not only supposed to limit sweat production but also to cover up the odors with its own smell.

One problem people seemed to have was not being able to wait out the 30 seconds it takes for each pit, and any other areas that you’re self-conscious about. If you do a full circuit you’re looking at several extra minutes of being in the shower, spending 30 seconds on each underarm, another 30 seconds on each foot, as well as on the genitals. Then you have to wonder if it’s a good idea to use the same product on all of these areas.

There is enough positive feedback to state that De Odor Works works well enough to merit a try, but depending on your expectations you’re either going to be happy with the results or disappointed. Although we couldn’t find a credible source that could verify that stainless steel works to neutralize odors or bacteria, there was enough social feedback to warrant a Try rating from us.

Our Recommendation
If you’ve made it a priority to get deodorant out of your life then this is worth trying out, as it’s been shown to do a good job if you use it as directed. You may also be able to get better results if you trim some of your armpit hair to increase the amount of stainless steel on skin contact. You may also choose to simply use an organic deodorant that is paraben and aluminum free.

What do you think? Does De Odor Works work or not?