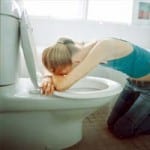 By asking if bulimia works, you’re assuming that it provides a desired effect of some sort, most likely weight loss. But bulimia is a serious medical disorder, leading to both physical and psychological problems that can take years of therapy to undo. This is not something that you want to consider as a valid form of weight loss, or wonder or not it will result in a loss of weight.

Overview
Bulimia involves a binging process, whereby an individual eats a normal or large portion of food to get a feeling of being full, and then either vomits it out or takes laxatives in order to process the food through the system quickly.

There are a host of problems that come with bulimia. For starters it eats away your tooth enamel. All of the stomach acid that passes through the teeth during vomiting takes its toll on your teeth. There was a special on the news the other night of a girl recovering from bulimia that couldn’t stop herself from throwing up in her mouth occasionally and involuntarily. She had become so accustomed to puking that her body just did it automatically.

You could also suffer from constipation, which will lead to a bloated feeling in your stomach and midsection. You might also get peptic ulcers or find out later that you can’t have children. There are so many reasons not to try bulimia that they can’t fit on this page.

The Claim
There are no proponents of bulimia, so there aren’t any claims made publicly. The undercurrent of thought is that bulimia makes you skinny. If you puke up your food then you don’t take on the calories associated with it so you get the taste and satisfaction of eating, but without the guilt and aftermath. These claims are understood without being made by any corporation or manufacturer of any product.

The Hype
Usually this is the part of our site that talks about how much hype is surrounded by products and weight loss products that are advertised on TV. There’s no hype surrounding bulimia, because it’s not marketed or promoted in any way, shape, or form.

An occasional celebrity is diagnosed as having an eating disorder and this brings it to the light of mainstream media. Most often the media does a good job of reminding viewers that it’s a serious medical condition, and not a fad to be followed or admired.

The Cost
There is no additional cost to bulimia. It involves eating the foods you currently it, but only regurgitating them Anorexia would be more cost effective, as this involves not eating anything, thereby saving on foods costs.

Evaluation
Don’t try bulimia as a way to lose weight. There are far more healthier ways to get to the size and shape that you want that you don’t have to take drastic measures to do it. Perhaps you feel like you’ve tried everything and nothing has worked, but don’t treat your body like that, and don’t bring on the laundry list of complications that it can lead to. It won’t make you feel any better about yourself, and your friends and family care about you.

Bulimia is an eating disorder, so it can’t “work”. It has never and will never be marketed as a weight loss solution, and is a very serious matter. You shouldn’t consider it as a potential way to lose weight. Toying with the idea could get you to try it, and if you try it you could get hooked on it very quickly, causing very serious health problems. These problems are even more drastic than the ones you might experience by being overweight.

Our Recommendation
If you’ve been considering bulimia as a possible weight loss solution, you may want to consider seeking professional help. You may already be on your way to an eating disorder of some sort, and have a skewed perception of your body image.

Add Your Thoughts on Bulimia Below

← Previous Does Anger Management Really Work?
⚅ back to blog
Next →Does Rosetta Stone Really Work?