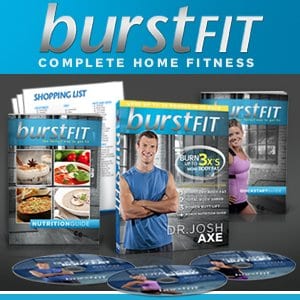 BurstFIT is a training program developed by Dr. Josh Axe that is supposed to be more effective than doing the cardio you might be used to. With so many fitness programs on the market, it can be hard to know which ones to try, so we break down whether this is one of them or not.

Overview
Aside from everything else we want in life, a healthy and lean body tops the list for most people. But the thing is we still don’t want to give up a lot of our time to get it. That’s why many are on the lookout for something that makes the most use of their time, and also provides the results they want by giving them a body to be proud of.

The Claim
You’re supposed to be able to burn three times more calories with the BurstFIT workout than with traditional cardio. They say that their workouts are so effective that your body will still be burning fat and calories up to 48 hours after you’re done. They say it can help with total body fitness, sculpting your major muscle groups, including your core and legs. They say it’s a way to burn up calories, and get the muscle tone you’ve been wanting, including the abs you’ve been dreaming of.

The Hype
Anytime you promise people that they’ll be losing weight and fat faster than other systems and programs you’re dabbling in a bit of hype. It doesn’t matter if you can actually back it up or not, you’re still preying on people’s desire to be fit and fabulous. As a consumer it’s important to keep a level head through all of this, and realize that in order to get the body of your dreams you’re going to have to clock some time in over the long term.

The Cost
The total cost for BurstFit is $52, which means it clocks in at far less than other programs costing over $100. Even though it has a lower price tag, it is comprehensive, including everything you need to get a good workout, except for the weights. You can actually buy it from Amazon for the same price if you don’t like giving your credit card details out to other websites.

The Commitment
You’ll need to commit yourself to the training, which is the same for any workout program you’re considering. We’ve reviewed a lot of fitness programs out there and we have yet to find one that says you can sit around and do nothing and still get fit. There are diet pills that promise to lose weight without working out, but they won’t get you fit on their own.

Evaluation
BurstFit is getting positive feedback from several different third-party communities. It seems that the method is effective, and it’s pretty easy to see why. The fitness world has long been touting the benefits of doing high intensity interval training, the only problem is that this method of training is typically not explained too well. What he seems to have done here is lay out a training regimen that uses the same principles, but in a way that it’s paint-by-numbers easy.

The other thing that users seem to really enjoy is that he shows different levels of training as you go along, so if a particular move is outside your realm of ability, you’ll be shown an easier way to do it. Likewise, if you find that you’re not being challenged enough he’ll show you a way that makes you feel the burn even more. This allows you to tailor the workout according to your own abilities, but also to grow as your conditioning improves.

It’s nice to get training advice from a doctor, and Dr. Axe runs a very helpful and informative blog where he goes into nutrition as well as several other health-related topics. It’s a pretty comprehensive place and a far cry from other instructors that are only knowledgable about exercise and weight training. If you followed his Real Food Diet while doing the Burst Fit training you’d definitely see better results than by training and following your old way of eating, but it’s best to change one aspect of your lifestyle until it becomes habit, and then work on the next.

BurstFIT is getting our Thumbs Up review, since it has shown that it has what it takes to help you succeed as long as you follow the steps as advised. Dr. Axe is an effective communicator, so if you’re tired of the rah! rah! peppiness of other instructors you might find it refreshing that he speaks to you directly as if you are a normal person. It’s not often that we see such a highly praised system, and in the world of fitness it’s all about taking the best calculated risks when it comes to which system to go with.

Our Recommendation
It’s good to get out of the mentality that there’s the perfect workout program out there that will solve all of your weight and strength problems, or that you’ll be able to do indefinitely. A better approach is to try out ones that seem to make sense to you, and then alternate between them so you don’t get bored. That way you take the pressure off of any one program as being “the one”. Almost all of them produce results if you follow them long enough, so it’s about continually keeping yourself interested to reap the rewards.

What do you think? Does BurstFIT work or not?