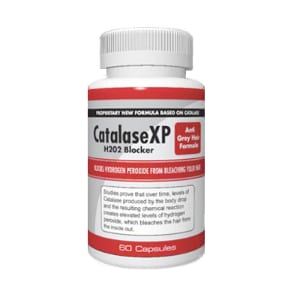 Catalase XP promises to get rid of your gray hair by treating the cause rather than just covering it up. The theory here is that a lack of the enzyme catalase is the cause for gray hair and by supplementing it you can not only prevent more gray hair from coming in, but you can reverse it back to your natural color. Sounds great if it works, so let’s see if there’s any validity to it.

Overview
Gray hair is thought to be just one of the things that happens when we start to get older. It’s often joked about during a stressful situation, like when a father has to watch his teenage daughter go on her first date. But for those that have it and want to get rid of it, it’s no laughing matter. There are dyes and cover ups out there like Just for Men, but that doesn’t fix anything, and sooner or later you’re going to have to apply it as more gray hair grows in.

The Claim
The makers of Catalase XP are working with the concept of the catalase enzyme being responsible for your gray hair, and that by fixing the glitch, i.e. restoring natural levels of the enzyme in your body, the problem will just take care of itself. By not having enough catalase in your system, they claim, hydrogen peroxide is allowed to run free and that’s what causes the classic graying. They also say that there are other ingredients like horsetail and plant sterols that provide moisture and counterbalance hormone levels to keep your hair the color you want it.

The Hype
The baby boomer market is huge, and many boomers have disposable income that they can use to keep themselves looking young for as long as possible. That’s why you see so many products sprouting up to try to capitalize on this anti-aging trend going on. You can expect this sort of thing to go on for the next 10 years or so, or perhaps even indefinitely. It’s a good idea to try to keep a level head through it all, realizing that some products will be flops and some might actually be able to do what they say they can.

The Cost
You can get a 30 day supply of Catalase XP for $33, and they have bulk discounts once you see that you want to go for a longer term. You can get the per bottle price down to $24 with a six month supply. If this works for you and you like the results you see, you’ll probably end up going with this for the long term, so it’s nice that they’ve set it up so that it’s not too expensive to try it out, and then giving the discount on a longer term commitment.

The Commitment
This is pill based, so all you really need to do is remember to take it daily as directed. Compared to having to dye your hair this represents a real reduction in your commitment level, and since it is supposed to be treating the cause of your gray hair, you are making it so the problem should go away, and stay away. The only drawback is that you’d have to keep taking this for as long as you want your gray hair to stay at bay, as your catalase levels will drop again once you stop supplementing them.

Evaluation
There’s actually a study that supports the theory behind Catalase XP, and no doubt this is what they’re trying to capitalize on. It’s important to note that the study was not done on the product itself, but they did find a correlation between hydrogen peroxide production in the body, and linked that to the graying hair problem. It is still not known whether adding catalase to your system will turn things around, but they say that this might be incorporated into products at some point. But does Catalase XP represent the future available now?

Many products out there are trying to cash in on the catalase connection to gray hair. They’re met with mixed reviews when tested out by actual users. It seems that there are some that use high quality ingredients and produce results. Others fall flat and only leave a trail of upset customers in their wake. So since it comes down to what sort of quality you’re using, all that’s left to determine is whether or not Catalase XP is bringing their A game.

Catalase XP contains 5000 IUs of catalase, as well as an assortment of other vitamins and minerals. There’s a good chance that this is one of the anti-gray products that deserves a try. Of course it’s not going to work in every case, but there’s a strong chance that it should show results in the majority of people that try it. Compared to some of the other pills on the market, they seem to be making a stronger effort at producing a quality solution.

Our Recommendation
At this price point it’s not going to break the bank for you to try it out. The challenge is really on the makers of this product to show results or else you can just return it and you’re out the $3 shipping fee. They’d much rather have you like it and sign on for multiple months, because it will be hard to turn a profit if they’re just getting a bunch of returns.

What do you think? Does Catalase XP work or not?

← Previous Does a NeverKink Hose Really Work?
⚅ back to blog
Next →Does the Multi-Stor Organizer Really Work?