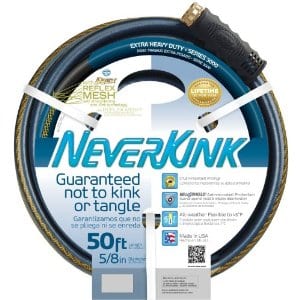 If the NeverKink hose caught your eye you’re probably wondering if it holds true to its name is really never kinks. A lot of hoses these days are tackling the problem of a tangled and kinked hose head on. It has to be the number one problem when it comes to using an ordinary garden hose. But does the actually deliver on its promise, or will you still have the same problems with it.

Overview
Garden hoses have remained relatively unchanged over the years, and you can still by the traditional kind off of store shelves. The only problem is once you get it home you realize it’s a big, heavy, bulky mess and when you try to round corners or unravel it it becomes kinked up, often restricting water pressure and sometimes stopping the flow of water completely. This can be a real drag when you’re trying to water the plants or grass, wash the car, or spray down lawn equipment.

The Claim
The company behind the NeverKink hose had enough brass to put their claim right in the name, so the basic promise here is that this hose won’t kink up or tangle on you, so you’ll be able to complete your outdoor chores with more ease, and less fighting and struggling with the hose. They also say that the hose feature real brass couplings, so it attaches to the faucet securely and without causing leaks. They also claim that it should resist mold and mildew thanks to a “microshield” that repels them.

The Hype
Gardening is becoming a more and more popular hobby, and sales of all types of yard equipment are climbing. At the same time there are several companies all trying to fix the problems with a standard garden hose, including making them lighter, smaller, and kink-proof. So a hose like this will definitely draw some attention and make a fair amount of sales. It’s just a question of whether or not people are happy after buying the hose.

The Cost
You can buy a NeverKink hose in several different lengths, and of course the price will vary depening on which size you go with. You can get a 50ft hose at Amazon for around $28, or they have a 25ft hose for around $19. You can also opt for their 100 ft hose at $43 and be able to cover the most ground. Compared to your typical hose, these cost a little more, but most people that have used them have said that they don’t mind, since this is quality built, and doesn’t kink or leak, and also that it’s a good value because it will last longer than a conventional hose.

The Commitment
Most likely you already spend a considerable amount of time outdoors either tending to your garden or lawn, or getting other things done. This should make it a little easier for you, and could even end up saving you time if you’re used to doing battle with your current hose to get it untangled, and to straighten the kinks out. There’s not much that can be done to relieve you of your outdoor duties, some things just take time and effort, but it could turn out that you don’t have to go hose shopping as much, since this is built to last.

Evaluation
There are some conflicting reviews for the NeverKink hose, with most people saying that it does work great, doesn’t kink, and fits securely to the tap. Others say that they had problems with theirs and had to return it for a replacement. Still others say that they had a hose explode on them. But overall it’s getting good ratings, so it could be a matter of a bad batch during the manufacturing process. This happens from time to time with mass produced products, and most companies are good about replacing defective units.

It’s important to note that they don’t make any claims of this being any lighter than your typical hose, and the big feature seems to be the lack of kinks. If you’re looking for a hose that won’t throw your back out when you try to move it around, you might want to look into the XHOSE. Its also free of any kinking, and shrinks down when you turn the water off so that you can carry and move it easily.

We’re giving the NeverKink hose a Solid Try rating, based on the feedback it gets, even taking into account the negative reports out there. It seems to be some individualized cases, and the overwhelming consensus is that these hoses are properly made and live up to the name. Apex, the company behind it, doesn’t just make this hose, they make industrial strength hoses and your standard garden hose, so they’re no newbie when it comes to the hose industry.

Our Recommendation
A lot of trouble can be saved by going with a garden hose that won’t tangle up on you. By fixing that problem you automatically make life a little easier outside. Outdoor tasks are usually hard enough, so there’s no point in making them any harder than they have to be. The basic thing to remember is that you’ll want to get a hose that is built to last, and they’ve got some special features on this hose that make it likely to, including a special additive that helps prevent mold and mildew from forming on it.

What do you think? Does a NeverKink Hose work or not?

← Previous Does the One Touch Verio IQ Really Work?
⚅ back to blog
Next →Does Catalase XP Really Work?

23 Customer Reviews on “Does a NeverKink Hose Really Work?”