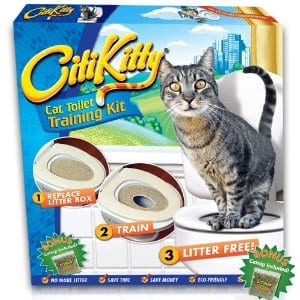 The CitiKitty is supposed to get your cat to use the toilet, much like Mr. Jinx in Meet the Parents. If you can wrap your head around the idea, it’s something that can be a cleaner way for your cat to do their business for everyone involved. But how well has it worked so far for those that have tried it?

Overview
Having a toilet trained cat might sound like a good idea at first, the draw of a litter box-free home is hard to resist. But the process of training your cat to use the toilet can be a tricky one, and not exactly accident-free. Some owners might have the patience for it, and it’s possible to train your cat to use the toilet without having to buy a product like this, but the idea here is to make it easy and natural for your cat so it can happen more quickly, and with fewer “misses”.

The Claim
They say you can save over $2000 by not having to buy litter anymore. They are likely calculating the cost over the lifetime of your cat. They also say you’ll be able to get rid of your litter box when they’re fully trained. They say it doesn’t matter how old your cat is, they can still learn to use this, and that it has worked for thousands of cats. They claim that it fits all different toilet sizes, and that if you have more than one cat you can train them both simultaneously.

The Hype
The creator of this cat potty trainer was on the television show Shark Tank looking for a $100,000 investment back in 2011. She’s also been written up in newspapers and featured on other TV shows. Before the Shark Tank episode she had managed to sell 40,000 units from the website, which is pretty impressive for a start-up. A lot of that buzz has died down in the last few years, and they haven’t had any press releases for some time now, relying more on positive word of mouth to get the job done.

The Cost
The CitiKitty kit can be found for less than $30, either at the official site or at Amazon. It’s far less than the Litter Kwitter, which is sold for $50. The two share a lot of common features, so many cat owners would opt for the CitiKitty first for the low price to see if it’s something that will work for their cat. They only accept unopened unused products for returns, so there’s no guarantee in place if it doesn’t work for your cat.

The Commitment
You’ll have to commit to the training on this, as it’s not an instant process. You’ll also have to get used to the idea of sharing your toilet seat with your cat. If you don’t like the thought of getting up close and personal with your cat while it’s learning to use this, you might want to opt for an automatic litter box instead.

Evaluation
The CitiKitty concept is a solid one, initially giving your cat a good-sized litter tray, and then gradually removing the center until they’re hovering over the toilet. It addresses several issues that cats have at first, namely not wanting to perch themselves on the toilet seat in order to go. They’ll also gradually be weaned from wanting to scratch and dig at the litter, an instinct they have that gets them to use the litter box in the first place.

There’s also the Litter Kwitter system that says it was the original toilet training system for cats. Some users of CitiKitty have complained about the quality of the plastic used, and point to Litter Kwitter as a better-made product. The two systems are very similar in design and function, and both start off with a full litter tray and take away rings until the cat doesn’t need a support system anymore. Both have videos showing cats successfully using the toilet without any trays, the idea being that they learned to do so by using the kit.

Even though there are videos showing cats successfully using the toilet, and assuming for a minute that they did learn to do it with the CitiKitty, there are sure to be some videos in existence that show a cat not wanting to use it. More impressive than seeing the end result are the videos out there of the actual process, which show a cat’s willingness to use the practice trays that get you to the goal. Here’s a video we found of a cat using the system for just the second time, so you can get a better idea of what it will be like to do the actual training.

The CitiKitty system is getting our Solid Try rating, but be aware that this is still going to involve some effort and persistence on your part, and even then it still might not work out for you. The reviews are mixed, but this is not surprising, as each cat is different, and each owner is too. Some owners will have a better intuition than others as to how to interpret their cat’s behavior, and give them the proper guidance to use this system properly. Some cats might have a defiant personality and not take to it at all.

But it’s proven than when things line up nicely it can work, and there are those that are now without a litter box.

Our Recommendation
If you’re serious about getting your cat to use the toilet, it’s a matter of persevering until they get it. This may involve trying different products, reading books on the subject, and visiting forums online to get tips from other cat owners that have been successful.

What do you think? Does CitiKitty work or not?

← Previous Does ADDTabz Really Work?
⚅ back to blog
Next →Does CloudBerry Backup Really Work?