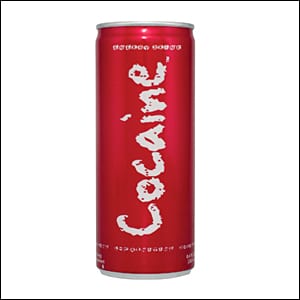 With a name like Cocaine Energy Drink you know the manufacturer is trying to make a statement. But is this drink so powerful that it should draw comparisons to the illegal drug of the same name? They’ve had their bouts with the FDA but have managed to keep their product on the shelves. It’s loaded with plenty of caffeine and taurine, so the only real question is, does it work?

Overview
Not relying on their shock labeling alone to sell the product, the makers of Cocaine Energy Drink have put more caffeine in it than rivaling brands dare to. They also put a hefty 750g of taurine, making this a pretty potent mix of ingredients that is sure to cause your body to react. It is this reaction by the body that people call an energy boost, or a shot of energy, but really it is your body trying to protect itself from damage, and also reacting on a physiological level to the stimulants.

The Claim
You can’t brand something with the name of a powerful and elicit drug and not at the same time be claiming that it provides a similar effect. That’s the entire point of calling it a shocking name, is to draw comparisons to actual cocaine. This was the case that the FDA was trying to make, but they were only successful at getting them to change the name, which they ended up changing back after a year or so.

The claim is that you will not just get an energy high, but you’ll get a much bigger energy high than you would with competitors like Red Bull and Rockstar. In fact they say that it’s as strong as drinking 3 Red Bulls in a row. This is because there’s lots more caffeine in a can of Cocaine Energy Drink, which will cause your heart to beat even faster, and will give the feeling like you are sped up and the world around you is in slow motion.

The Hype
Not to bring up the name thing again, but you are intending to hype your product by calling it Cocaine Energy Drink. Even the whole fiasco with the FDA is good for business, as it creates a buzz and gets people curious to try it. As they say all press is good press and countless news stories were likely aired, raising people’s awareness that it even existed.

You know you’ve made it big when you make it on Ellen:

The FDA almost did them a favor. Nothing gives you street cred quite like having your product pulled from the shelves by a government watchdog. Especially when you can just cater to their demands and re-release your product with the label covered up, and with a font that looks like white powder. It’s all just a game.

The Cost
Cocaine is not cheap, and that’s if you can hunt it down. It used to be that you could get it from online retailers like Amazon. Nowadays it’s a little harder to find and you have to go with other retailers where you’re not really guaranteed what sort of condition your cans will be in. Advertised prices have it as low as $1.66 per can, but that’s if it’s in stock, which it isn’t.

Evaluation
The Cocaine Energy Drink experience doesn’t claim to be a replacement to the real thing, and they even include strong labeling that refers to those that would think that as “idiots”. With the fact that Coca Cola got its name from cocaine and even included some in their earliest batches, it’s not beyond the scope of reasoning that a company would try to slip some in there. But of course they wouldn’t, so you should not make comparisons between these two products.

With all of the hype and buildup, Cocaine Energy Drink is something of a letdown. Its taste has been panned by critics, but its boost of energy usually gets a resounding thumbs up. Some have reported a caffeine high lasting several hours, with no subsequent crash. Others have said they expected even more of a rush with all of the buzz surrounding it.

If they would have spent more time getting the taste right, they may have had more success finding a mainstream audience. They did follow up their initial offering with a spin off that is designed to cut back on the burning sensation you get from drinking it.

Our Recommendation
For the price and hassle of getting your hands on a can of Cocaine, it’s just not worth it. Unless you live in the select few markets where you can find it on store shelves, you’ll have to special order it. All of that waiting and expense for a few hours of energy that you can easily get from other readily available sources just doesn’t make sense.

What do you think? Does Cocaine Energy Drink work or not?

← Previous Does Rip It Energy Drink Really Work?
⚅ back to blog
Next →Does Bosley Really Work?