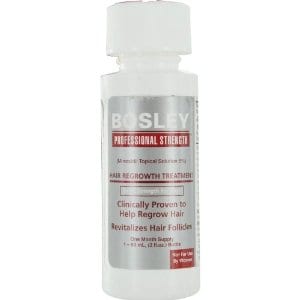 You might be familiar with the Bosley company as they’re no strangers to running advertisements on TV. This is not your ordinary hair loss product, this is actually hair transplants in which they take hair from the sides and back of your scalp and move them to the places where you need them. But everyone knows a botched hair transplant is often worse than being bald. So does Bosley produce quality results?

Overview
Bosley Medical has been in the business of helping men restore the look of their hair for over three decades now. Safe to say that this is no fly-by-night business and they must be doing something right in order to stay afloat for so long. Most people are familiar with the Hair Club for Men, their main competitor because of the commercials with the guy that cities not only the president but also a client. Bosley offers similar services and products.

The Claim
The claim made by Bosley is that they’ll be able to restore your hair to its original condition by transporting follicles that are known to grow your whole life to the top of your head where your hair is thinning. The procedure can be rather extensive, with anywhere from 600 to 3000 grafts taking place depending on how bad your condition is.

The Hype
There is not much hype involved with Bosley, because many people write it off as being too expensive and not something they can justify. It does seem that this procedure is geared towards men that have tried everything else and are willing to spend a small fortune on restoring their hairline to its original place. The commercials provide some hype, but they do well to avoid over exaggerating the kind of results you’ll see. They have gotten into some trouble by understating exactly what the procedure entails in regards to pain and suffering.

The Cost
This is one of those products where the saying “if you have to ask, you can’t afford it” comes into play. Although they have a payment plan that can put you in the $150-$250 ballpark per month, the overall treatment can cost over $10,000. If your hair is very important to you, like it is with most men, this might seem worth it if it provides the results promised by the before-and-after pictures in the ads.

The Commitment
Aside from the financial commitment you’ll also have to show up to receive the treatments. This is not a one-shot deal where you just walked in and they replace everything in one day. Is done in phases so that your hair has time to heal between visits. If you are a busy guy you might find it rather inconvenient to go to the office so many times. However with the price you’re paying, most men find the time to have it done.

Evaluation
When a product has to justify a $10,000 price tag it had better deliver. Being in business well over 30 years there really isn’t a possibility that Bosley doesn’t work. There’d be a large uprising of disgruntled customers demanding their money back for a lousy job done on their heads. Of course, there will be those patients that could not be helped by the Bosley method, but overall it must be effective.

It’s easy to find negative reviews for something like this because results will vary from person to person and from surgeon to surgeon. There is no one surgeon that is doing every single operation, and not every man has the same scalp condition and overall health.

As technology improves the method can get more and more streamlined and work on a smaller scale. As long as Bosley stays current with the new technologies that emerge the results should get better and better. They also combine their transplants with products that contain minoxidil and scalp cleansers to make sure that the newly grafted hair follicles take root and stay put for years to come.

Complaints and Controversy
It is important to note that Bosley Medical is not without its fair share of criticism and court cases. Any company that has been in the business world as long as they have is bound to have people saying they were taken advantage of or that they’re not conducting business properly. Many of the complaints were with the type of advertising they do, and the kind of claims they make which some say misrepresents the actual procedure.

There’s no way to say with any definitive proof whether or not Bosley works. This is a rather expensive coin flip that could go either way. It can’t hurt to get a consultation to see what kind of information you can gather about your own personal situation. Of course they will try to sell you on getting the procedure done, but they can’t force you to do it, and at least you’ll know where you stand in relation to how many grafts you’ll need.

Our Recommendation
We would recommend going with Bosley only if you tried other hair loss treatments with no success, and have a rather large bankroll. This is the closest thing you’ll ever get to turning back the clock in regards to your hair. When you use hair growth treatments like Rogaine you have to keep using them indefinitely to maintain whatever results they provide. With something like Bosley your hair should continue to grow like natural and match her hair color exactly for the rest of your life.

What do you think? Does Bosley work or not?