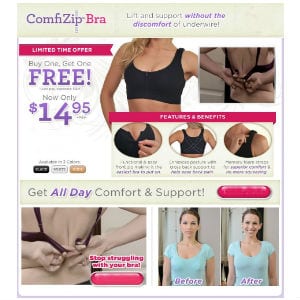 The ComfiZip Bra is designed to replace some major design flaws in ordinary bras, taking away the need for an underwire but still providing the right amount of support. The biggest question this raises is whether or not they’ve figured out how a bra should be, and if they’ve managed to succeed in bringing it to market.

Overview
There are definitely a few things wrong with bras that need some fixing. For starters, having the strap in the back just doesn’t work, and the straps on the shoulders have a tendency to dig in, especially if you have a bigger bust with added weight pulling down on them all day. It’s a wonder that these haven’t been reinvented in all these years, as there are common complaints and problems among many women.

The Claim
The makers of the ComfiZip Bra say that it able to lift and support you without needing an underwire, which if you’ve ever experimented with wireless bras you know that they just don’t seem to provide the same amount of support, although they are more comfortable. They say that the reason it is successful is because of the front-facing zipper, which allows you to zip the bra up and see what you’re doing. They also say that the criss cross straps in the back are what provides the support and helps with your posture. They also say that there is memory foam in the straps so they won’t be digging into you the way that normal bras do.

They also say it’s designed to sculpt and shape your upper body so that it follows your curves, not the other way around. They say it perfects your posture not just in the front, but in the back as well. They say it’s made of a special blend of materials that acts like a second skin, so you don’t get bulges of back fat surrounding the sides of your bra and bra straps.

The Hype
Bras have been around for a long time now, and several companies have tried to create new bra designs and shapes to fix the inherent problems, but overall they haven’t been too successful at effecting change across the brazier industry. This could be just another instance where they point out everything that’s wrong with a bra but then fail to provide the better alternative that was promised.

The Cost
The total cost of two ComfiZip Bras comes to $31. They say that support bras can run around $50 so that would put the cost of two of those at $100, making this look like a pretty good price. Of course there are other supportive bras that are similarly priced to this one. Take for example the Ahh Bra which gives you 3 bras for $70, or a price of $23 per bra. This makes the ComfiZip offer look even better since they have a per bra price of less than $16.

The Commitment
This should reduce the time it takes you to put on your bra, and the main pitch they make is that you won’t have to struggle with the bra strap behind your back anymore.

Evaluation
The ComfiZip bra has some features on it that we haven’t seen in other “better bra” products on the market. The use of a front zipper is a great idea, and the material they’re using is kind of like what you see on the popular shaping products that helps to smooth down those unflattering spots that occur when you put on a typical bra. If this can flatten out your back and make it look more smooth, it’s going to outperform most bras sold in stores and malls.

Trying to provide the support of an underwire without using an underwire can be tricky, but using the criss crossing action in the back seems to be working well at redistributing the weight over a larger surface area, freeing you from having that underwire digging into your chest. Some women will find that they can wear this in place of their normal bras, while others will designate it for those days or times when you don’t really need a conventional bra.

The ComfiZip Bra is getting our Solid Try rating, based on the amount of good feedback it’s received, as well as the price point they’ve chosen for it. To get two bras delivered to your door for $31 is a great deal, and with all of the features in place on this you’re sure to find a use for it, whether it becomes your new sports or yoga bra, or whether you end up really liking it and using it everyday as your regular bra.

Our Recommendation
There’s no reason not to add this to your bra collection. It can be used as a great “around the house” bra or you might end up liking it so much that you wear it all the time.

What do you think? Does ComfiZip Bra work or not?

← Previous Does Squeezy Freezy Really Work?
⚅ back to blog
Next →Do EZ Pockets Really Work?

11 Customer Reviews on “Does the ComfiZip Bra Really Work?”