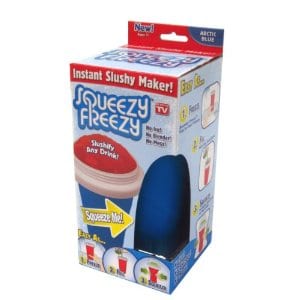 Squeezy Freezy is a slushee making cup that you’re supposed to be able to squeeze repeatedly to create a slushed drink. It’s one of many different options presented to those that want to make their own slushies at home, but the real question is whether it actually works or not.

Overview
The novelty of being able to make your own frozen slushies at home is so big there are plenty of products on the market that promise they can do it. Perhaps it’s avoiding the high prices of Slurpees and Icees, or just the convenience of not having to leave the house in order to make one.

The Claim
The big claim by the makers of Squeezy Freezy is that you can make a slushy just by squeezing the cup repeatedly until the insides slush up. They say you don’t need any ice, no blender, and that it doesn’t leave a mess behind. They say that the materials used are non-toxic, and BPA free. The steps are easy enough, you freeze the cup, add your drink, and then squeeze until it’s ready to consume.

The Hype
The hype here is that they’re riding on the success of the Slushy Magic, and have come up with a way to make slushy that is a lot easier than shaking. Let’s face it, shaking a cup for a few minutes can be a lot of work, as shaking something is a forceful activity that can tire you out rather quickly. Not to mention that when we tried shaking Slushy Magic it made quite a mess and required paper towels to contain it. A squeezing motion, by contrast, is easier, and is less likely to make a big mess since it’s not such an impactful motion.

The Cost
Squeezy Freezy is $30 and you end up with two of them in the same color, so effectively $15 each which includes shipping. This is brought to you by the same company that brought you Slushy Magic, which goes for about the same price and has been the cause of much debate over its ability to make a slushed drink.

The Commitment
This should make it pretty easy to make your own slushy whenever you want one, and it allows you to use your choice of beverage so you aren’t limited to the flavors at the local 7-11 or other convenience store with a slushy machine. You can get creative and use things like chocolate milk to make a sort of milk shake, or experiment with different flavored drinks like Snapple or Arizona iced tea and see which comes out best.

Evaluation
The Squeezy Freezy cup has performed pretty well in real world tests, and a large number of users have reported success with it. Keep in mind that there are also those that say it doesn’t work too well, but there’s a plausible explanation for the poor reviews. What trips up many users of frozen slushy makers is that it’s easy to toss the directions to the side and say “OK, I get it, pour in beverage and squeeze, easy.” But if you don’t do exactly as you’re supposed to you’re going to end up with disappointing results.

There are also tips to make this come out as best as it can, including putting the cup in the back of the freezer where the fan is, as this is the coldest part of the freezer and will do a better job of freezing it than if you just put in the door, or close to the front. You should also pre-chill your beverage, even putting it in the freezer for 5-10 minutes to get its temperature down. Some have also suggested that you put the entire thing back in the freezer for about five minutes after adding the beverage to cool it off more.

Squeezy Freezy is getting our Thumbs Up rating based on the positive feedback it receives and the fact that it does actually slush-ify your beverage of choice if the directions are followed accurately. When evaluating whether a product works or not you have to take into consideration whether it has the possibility or the probability of working for the majority of those that try it. In this case if you don’t follow the instructions there’s a chance that you might get lucky and it will work, but if you follow them closely there’s a strong chance you’ll enjoy what it provides.

Our Recommendation
This seems to be a winner, and is outperforming the Slushy Magic that was previously released by the same company. It seems that they’re serious about perfecting the at-home slushy making experience and it will be interesting to see what unique way they come up with next, or if they’ll just come out with a modified version of the Squeezy Freezy since that’s shown to work well and squeezing is much easier than violently shaking a cup.

What do you think? Does Squeezy Freezy work or not?

← Previous Does the Kurio Touch 4s Really Work?
⚅ back to blog
Next →Does the ComfiZip Bra Really Work?