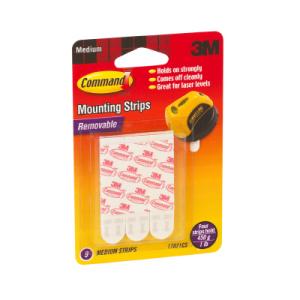 Command Strips are designed to allow you to hang up pictures, posters and other flat items without damaging the walls, and without having your things fall off of the walls. It is a replacement for nails, tacks, and other hanging solutions that leave holes in your walls when you take them out. The promise here is that when you put them up, they won’t come undone like ordinary double sided tape. But do they really work as advertised?

Overview
Surprisingly, hanging things on walls is a pretty big industry. Since the traditional way of a hammer and nails leaves holes in the walls, and sometimes involves things falling off the wall, there was definitely a gap to be filled here. Not only are these strips supposedly effective, but they are easy to use as well, so if you’re not really good with a hammer you can use these without worrying about getting it wrong.

The Claim
Command Strips say that they are the damage-free way to decorate and organize your home. They also have a line of hooks, so they are trying to be the total solution of getting various items onto your walls. The part that makes them unique is that they can be removed easily when the time comes, and you won’t have to clean up bits of adhesive like you do with other sticky strips. These days they are pushing their clear line of hooks that employ the same stick strips in order to hang on the wall.

The Hype
The hype is that either through a clever advertising and marketing campaign, or a word-of-mouth buzz going around saying that these work, there is a perception that the Command line of products is effective. That’s why it’s interesting that so many people have voiced that it doesn’t work quite as well as you might think.

The Cost
The price of Command Strips varies depending on which size you get, and the quantity. Typical prices range from $5 to $10, with an average price being around six or seven dollars. Some people have said this is rather expensive for hanging strips, but we’re thinking that 3M is charging for the brand recognition, and the perceived reputation that it has in the market. Also, when you compare it to your other options, it makes sense to spend a little more for something that goes on and comes off without much fuss.

The Commitment
Compared to other ways of hanging your pictures and posters, this is either a reduction in commitment or at the very least the same amount. All that’s required is to apply these to a clean surface and then affix your desired item to it. After that, it should stay put and require no more thought on your part. When it’s time to take it down you just pull the adhesive until it yields. Easy cheesy!

The Clever Bit
The feature that put Command Strips on the map is that you can simply give them a tug when they’re ready to come down, and they should pop right off, leaving no marks and no holes, and basically no trace left behind. This is especially great if you are renting your home, condo, or apartment and you don’t want to deal with a cranky landlord pointing out holes in the wall and threatening your security deposit. It’s what separated them from double-sided adhesive strips in the first place.

Evaluation
Command Strips have created a lot of debate as to whether or not they work, with one side saying that they’ve been able to hang things up for years, and another side saying that they weren’t able to hang up anything without them without having them fall down. A common reason given for the negative feedback is that the directions weren’t followed. With a product like this, it’s tempting to just open it and stick it to the wall, but the directions clearly state that you should make sure you are applying it to a clean surface.

A lot of the examples that are given from people that said it doesn’t work make it seem like perhaps they did not follow the directions properly, and that’s why the strips are not working working the way they are supposed to. However, there are also plenty of people who said that they followed the directions to the letter, and it still did not work for them. It’s strange the product would have such varying opinions from users. Usually you’ll find some middle ground, some people saying that it works okay, but with these strips people either say it works fantastically, or not at all.

While it is possible that Command Strips won’t work for you, we think that for most people they work just fine. Be sure to check whether the surface you’re considering putting things onto is one of the surfaces that are listed as being okay. After that, you want to follow the directions exactly, and take the time to do the job right. The reason they need to be applied so specifically is because they are designed to come off later without much hassle.

Our Recommendation
Pick up a pack or two of these and give them a go. Chances are if you follow the directions accordingly, and use it on the right type of service, you’ll have a fantastic experience with these and your home will look better than you ever thought possible.

What do you think? Does Command Strips work or not?

← Previous Does the Silver Sonic XL Really Amplify Sounds?
⚅ back to blog
Next →Does the Pedi Spin Actually Work?