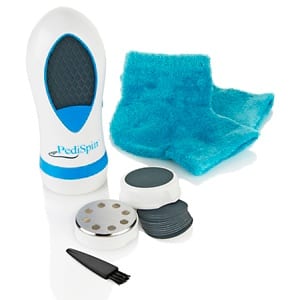 The Pedi Spin is proof that when one product works there will be other ones that come along to share in its glory. The Ped Egg is one of the most successful products ever developed for foot care, and there has been a slew of imitators to try to capitalize on its popularity. It didn’t take a rocket scientist to come up with the idea to motorize the Ped Egg, and that’s basically what we have here. But does it actually work at removing calluses and dead skin from your feet?

Overview
One complaint people have about the Ped Egg is that while yes it works, it can be a little bit tiring to grate your feet for so long. It definitely would be nice to add some power to the situation, as this would allow you to get the benefits without having to put any elbow grease into it. So the idea is solid, but in the case of the Pedi Spin, they got the follow through all wrong.

The Claim
The Pedi Spin claims that it is an easy and painless way to get smooth and soft feet. They also say that it’s like getting the ultimate foot massage when you use the buffering pad. They claim you can use this any time and anywhere, and that you can use it on your heels, souls, and your toes.

They say that it is guaranteed to be safe and gentle on your skin, so even though it’s motorized it won’t grind into your good skin. They also say that it won’t make a mess, because your shavings will end up inside the head of the unit. All that’s required is to open it up and empty it out when you’re ready.

The Hype
The hype is that this is trying to ride the coattails of successful products in the foot care market, namely the Ped Egg. The infomercial makes it look absolutely incredible, with chunks of calloused skin clumping off of the model’s feet in the video. It’s also highly believable that a motorized pedicure tool would work wonders on your feet.

The Cost
You can get a Pedi Spin for $29 which includes shipping as well as some “free” bonuses. When you compare this to the cost of getting a pedicure in a salon, this would be a one-off purchase rather than a continual charge. In fact, that’s what many people are after when they get products like these, trying to avoid going to the salon and paying high prices to have someone chisel their calluses down.

The Commitment
The whole point of buying this would be to reduce the amount of time it takes you to take care of your feet. If you’re tired of the tedious nature of filing down your rough skin, you would be able to benefit from a tool like this, as it would shorten the amount of time as well as the amount of effort you’d have to put into the task. If it actually worked, that is.

Evaluation
The Pedi Spin is a tremendous letdown. It’s powered by ordinary batteries, and this is their real problem. Rather than equipping it with a lithium ion battery that would provide enough power to work, they’ve made it so that the slightest bit of pressure causes the motor to stop running. Many of these cordless products that use ordinary batteries end up flopping. It’s the cheap way out for the manufacturer, but it usually ends up costing them more in the long run due to fewer sales, higher return rates, and people calling it a scam.

The overall consensus is that this is a piece of junk, and a waste of money. Users have also commented on some of the trickery used in the infomercial, saying that the skin being sloughed off of the feet looks a little suspicious. They must’ve used some sort of special effects in order to make the product look believable on camera, because there hasn’t been a single person out there that has been able to replicate that performance in a real world setting.

\It’s also not very easy to use as far as switching out the heads in order to use the buffering pads. In fact, our tester couldn’t figure out how to get the pads onto the head, and there were no instructions included to shed any light on the subject. After trying several different methods, she eventually gave up for fear of breaking the unit.

Although we’d love it if the Pedi Spin worked, we’re sorry to say that it doesn’t. Hopefully another product will come around with the same sort of concept, only with better execution. Even if they had to make a corded unit in order to supply enough power, it would be worth it. The concept is sound, but they opted for a cheaply manufactured piece of plastic, instead of spending a little more on production and seeing a smaller profit margin.

Our Recommendation
Take a pass on this one and stick with your Ped Egg. While it may be tedious and a little tiresome to use, the results you get with it are worth the time and effort. Perhaps one day the Ped Egg company will produce a better powered version, but until then you’ll just have to stick to powering it yourself.

What do you think? Does Pedi Spin work or not?

42 Customer Reviews on “Does the Pedi Spin Actually Work?”