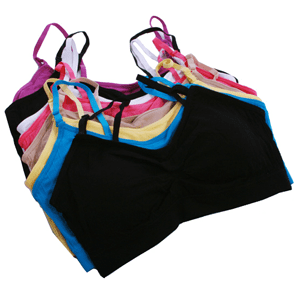 The Coobie Bra is purported to be one of the most comfortable bras you’ll ever wear, and they have some pretty detailed reasons as to why. But can a simple bra like this really fix some of the most common problems with conventional bras, or is this just another flop in the bra department?

Overview
The bra has remained relatively untouched since the Victorian era and it’s high time somebody made some adjustments to it, right? Well, it seems that the most recent trend is treating the bra as one-size-fits most kind of deal, losing the conventional sizing charts and making it so that the bra can customize itself to you rather than the other way around.

The Claim
The makers of the Coobie Bra claim that it’s the most comfortable bra ever, and they cite the reason as the type of materials being used, but also the way it’s constructed. They draw a distinction between themselves and what they consider knock-offs, likely all of the brands you see advertised on TV has the next big thing in bras. But overall they stress the comfort as the biggest selling feature here.

There are a few reasons as to why these would be considered more comfortable than your average bra. They’re wireless, so you won’t have a wire cutting into your sides. They’re also able to expand and contract due to the Spandex they contain. This means that as your body gets bigger and smaller at different times of the month you won’t feel it so much in the bra area. They’ve also made it so there is no clasp on the back, so you don’t have that digging into your back.

The Hype
There isn’t too much in the way of hype, although they do rely on what customers are saying about their product as a way to encourage positive word-of-mouth. From what we could determine these are not only getting bought, but getting talked about among women to the point of creating something of a buzz about them.

The Cost
You can buy the Coobie Bra for as low as $18 and of course the price varies depending on the type of bra you’re ordering. This is pretty reasonable, considering that a trip to Victoria’s Secret will cost you more than that, and you’ll be getting a bra that likely won’t be as comfortable. When you put these up against other bras that are similar, you see that they’re about the same price, maybe a little more, but they aren’t using any sort of pricing gimmick where the price is lower than the shipping charges.

They seem to earnestly want you to be happy and offer the ability to return this for a different size if it doesn’t quite fit right, and they don’t charge you additional shipping when they ship out your replacement bra.

The Commitment
This should represent a lessening of your commitment level when it comes to wearing your bra all day. You won’t have to constantly be re-adjusting your bra throughout the day, and you won’t have those telltale marks you get after removing your bra at the end of the day.

Evaluation
The feedback is in on the Coobie Bra, and the trend is very positive. The consensus is that it’s a very comfortable bra, that it fits true to size, and that it can be used both for lazy days around the home, or as a regular bra out in the world. Of course there are a few naysayers that said it wasn’t quite what they were expecting, but upon closer inspection these seem to be oddball cases where no bra is really going to be a good fit. Once you disregard the feedback that doesn’t really apply to the majority of people, it becomes clear that in most circumstances this is a winner.

The padding on these bras seems to be a feature that gets talked about a lot. Not only does it help the bra feel better, but it also improves the appearance. The seamless nature of the bra means that you can wear it underclothes for a great look, and you don’t have the easy to spot signs that you typically get when you wear a bra with seams aplenty.

Overall, the Coobie Bra is getting our Thumbs Up rating. They’re doing good and seemingly getting better, releasing new bras with added features and additional colors and styles. It’s always good to see a company expanding their operations, adding to their product like while making improvements based on consumer feedback. The company behind the bras appears to be trying to stick around for the long term by producing quality products, with an eye on the manufacturing process. Hopefully they will keep up the good work and will be the go-to bra supplier for their happy customers.

Our Recommendation
There is no shortage of choices when it comes to getting a bra that is supposed to be very comfortable. But with the Coobie brand you’re getting a quality product that has stood the test of time and managed to generate a large amount of positive feedback across several third party sites. You could go with something like the Genie Bra, which also has relatively good feedback, and is priced similarly. It’s really up to you, but at these prices you can’t really go wrong in trying them both out and seeing which one you prefer.

What do you think? Does Coobie Bra work or not?

← Previous 30 As Seen On TV Products That Don’t Suck
⚅ back to blog
Next →Does Neoflam Really Work?

614 Customer Reviews on “Does the Coobie Bra Really Work?”