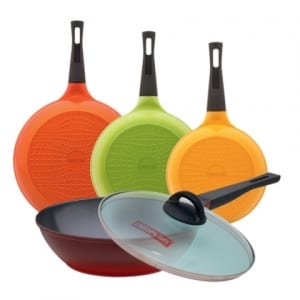 Neoflam is a line of cookware and cutlery that is made so that it doesn’t harm the environment, or you. It’s obviously been created to try to appeal to those that don’t like the thought of using non-stick cookware with toxic chemicals that can be released into the air and onto the food. But how well does it actually work?

Overview
The entire non-stick cookware industry is borderline scandalous. When Teflon first came out it was all the rage because of its nonstick nature. But it didn’t take long for rumors to start surfacing about how it contains harmful chemicals, how you shouldn’t use metal spatulas on it because if you scratch them it releases toxic gasses. Soon actual scientific reports came out to confirm this, and modern non stick cookware is made with all sorts of different materials in an attempt to create a non-stick surface without the harmful side effects.

The Claim
The big claim of Neoflam cookware is that it doesn’t contain things like PTFEs and PFOAs so you’re getting cookware that you can use and not feel bad or nervous about. All of their products have a strong focus on the consumer, as well as the planet. For example their cutting boards use an anti-microbial material so you don’t transfer bacteria from one use to another. And they also have a line of bamboo products because of its sustainability to the Earth, and beneficial properties for users.

The Hype
There isn’t much hype, other than they’re catering to a select group of consumers that care about what goes into their bodies, and the environment. Presenting your product as a solution to a problem that many other competing products have can’t really be considered hype because it is what it is. There is some hype to promoting green products, because each person has their own idea of what green means, and whether or not a product deserves the title.

The Cost
The cost of Neoflam products varies depending on what you’re after, with their ceramic cookware available for $120 for a 5 piece set, or their microbial cutting boards $40 for a set of 3. Overall, the prices seem a bit higher than what you can get similar products for, and obviously you’re paying more

The Commitment
All you’d really need to do is replace your current cookware, knives, or cutting boards with these. Depending on what you’re currently using they may make your life easier, as the non-stick cookware is supposed to be very non-stick, like the kind of demonstrations you see on TV for frying pans. The knives they make could end up saving you time as well, since they’re supposed to retain their sharpness. The cutting boards might not save you very much in the way of time, but they’re designed in a way to make things less messy, with features like groove to catch juices that might otherwise run all over your counter top.

Evaluation
By all accounts Neoflam appears to be well made, even though its manufacturing happens in China. The company itself is headquartered in Seoul, Korea, but they have moved their manufacturing to China. With all of the reports of spotty manufacturing and harmful chemicals being used in products coming out of China, it’s interesting that they would source their product from there, seeing how their biggest draw is that their cookware is made without these sort of chemicals.

The general opinion from Neoflam users is that the products are well-made and they do what they claim to be able to do, with the cookware especially getting good reviews. This is interesting to note because most of the time people are pretty picky about how their kitchen products perform, and won’t waste an opportunity to let others know if something doesn’t live up to expectations. But what we’re seeing is that buyers are generally happy with their purchase and would buy a Neoflam product again.

We’re giving Neoflam our Thumbs Up rating. Not only do their products pass the real world test by garnering positive feedback from users, they’ve also stood the test of time and have expanded their business and grown more successful as more people discover their products. When looking for kitchen products, it’s always a good idea to go with those that have a high chance of success once you start using them in your own home, and that’s the case with these.

Our Recommendation
If you’re in need of a cookware set this seems to be a viable option, as it provides benefits over using other non-stick options because of its focus on using ceramic instead of a toxic coating. The other products they create such as their knives and cutting boards, that would be more of a preference on your part if you like the design and additional features they have, or subscribe to the idea of bamboo as a green material.

What do you think? Does Neoflam work or not?

← Previous Does the Coobie Bra Really Work?
⚅ back to blog
Next →Does Inflamazol Really Work?