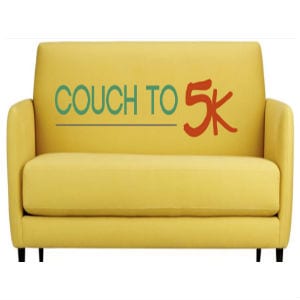 Couch to 5K is a way to go from zero to having completed your first 5 kilometer race, without burning out or getting discouraged. Most of us would like to run more, since it’s been shown to provide health benefits, but can a plan like this really work for someone that isn’t so fit?

Overview
A 5K race, sometimes referred to as a “fun run” is a little over 3 miles long, and usually benefits a charity or organization, but can sometimes just be held for kicks. It’s meant to be a length that most people can accomplish with just a little bit of training, and those that are avid runners have no problem knocking out three miles and try to do so in as fast a time as they can.

The Claim
The claim of the Couch to 5K app is that by following their running plan as set out for you, you’ll be able to start from not being anything resembling a runner, to being able to complete your first 5k race. They boil it down to just 3 days per week that you’ll need to use it, and just 30 minutes each day. They say that in 9 weeks time you’ll be 5K ready.

The Hype
The thought of getting healthy and more fit is a pretty strong one for most of us, and when you couple that with the thought of finishing a race and having the experience of crossing the finish line, you’re dealing with some pretty powerful emotions. It’s no wonder that so many are drawn to this app, especially when they see the sort of ratings its getting and seeing it help other people off the couch and into their running shoes.

The Cost
It’s $2 or $3 for the Couch to 5K app, and you can add it to your iPhone as well as Android devices through either the iPhone App Store of Google Play. There are books and other materials that also promise to show you how to get through your first 5K, but these are going to be more expensive and are not as convenient as an app that helps you track your progress.

The Commitment
You have to commit to running more than you currently do, and try to get your mind around the idea of just starting off slowly, per their instructions. It sounds counterintuitive to have to commit to taking it easy, but it’s one of the hardest things to do, finding a good pace that you can stick with for the longer term and then having the discipline to stick with it and not push yourself so hard at the outset.

Evaluation
One of the biggest stumbling blocks people have when they try to start on a running program is starting overzealously. They get amped up and excited about the idea of starting, that they go to hard on their first run and end up too sore to run the next day, or the next. In some instances they injure themselves which further sets them back and might even develop the belief that they just aren’t cut out to be a runner. If you can relate to any of that then you’d probably benefit from a running program like Couch to 5K.

The beauty of this app is in comparing it to what you would do if you didn’t have its guidance. You’d probably start off by running too fast or too far on your first day. You’d probably push yourself to run more than 3 times per week, or more than 30 minutes per day. You’d probably take longer than 9 weeks to do it because of wearing yourself out or injuring yourself. It doesn’t make sense to go through all that when it’s just a few dollars to avoid it and have the confidence of knowing that you’re doing it the smartest way possible.

The feedback on this app is generally favorable, which is all you can expect from an app that relies so heavily on an individual’s perseverance and will power. Those that like it say that it’s helped them stay focus, stay on track, start off at a manageable pace, get fit and lose weight. There’s also a GPS function to it so you can track where you’re running and where you’ve ran. That’s pretty good for just a little 2 or 3 dollar application on your phone.

Couch to 5K is getting our Thumbs Up rating because it is well thought out, easy to use, and if you follow it to the letter you’ll have no trouble going from being a couch potato to a real runner with a race under their belt. The 9 week time frame is just about right, since any longer would be kind of hard to wrap your head around, and any shorter would mean that you’d have to cram more running in during those 9 weeks.

Our Recommendation
If you’ve tried to start running and couldn’t, or have always wanted to but didn’t know how to start, a step-by-step guide like this is essential. Being a mobile app makes it really convenient to take with you and have handy. Because they tell you it’s going to take 9 weeks you can search for 5Ks in your area that are 9 weeks away and sign up for it. That way you’ll arrive at the race raring to go and you’ll know that you’ll be able to finish it with no problems.

What do you think? Does Couch to 5K work or not?

Customer Review on “Does Couch to 5K Really Work?”