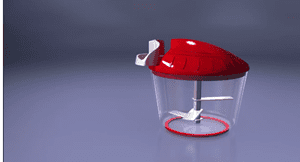 Being the one that is responsible for preparing the family meals really can be fun, or it can end up being a big hassle. If you have the right tools to work with while doing this task however, it makes it a whole lot easier. We thought for this reason you may be interested in the Crank Chop Review.

Overview
The people who brought you the Slap Chop and the Schticky are at it once again and have brought forward a new toy for those of us who love to cook! The all new chopper from the company is the Crank Chop. A hand held chopping device that slice and dices quickly and easily.

The Claim
The claim by the company is that the Crank Chop is the easiest and quickest way to chop a wide variety of vegetables and other items in the kitchen and can be done by pretty much any one.

The Hype
The hype surrounding the Crank Chop is realized most by the fact that is being sold by the makers of the Slap Chop and the Schticky. Experts at the direct marketing mission of the founder and head salesman the infomercials and the like are designed to get the maximum amount of exposure in the shortest time frame possible.

The Cost
The cost of the all new Crank Chop is only $19.95 . That price will also get you a bonus “Food Topper” which is essentially a large shaker that you can dispel food like Parmesan cheese with.

The Commitment
Very little in the way of commitment required for the Crank Chop. Toss it into a drawer when not in use and when dirty simply take it apart and throw in the dishwasher. Pretty simple indeed.

Evaluation
The all new Crank Chop is a pretty simple device. You unscrew the lid, toss in your ingredients, re-affix the lid and then grab the handle and pull! The stainless steel blades contained therein then spin and chop the food into manageable pieces for cooking. The claim is that the more you pull the smaller the pieces will become. The main reason that the Crank Chop is successful as opposed to just using the older Slap Chop is that the pull and chop system is a little bit easier on the hands than the Slap Chop and thus can be used more effectively by a wider range of people including the elderly and those with less hand strength needed for the Slap Chop.

All in all the Crank Chop does do what it says it will do. It does chop food. How long it will last is another story. As with most “As Seen on T.V” products the quality of the unit is in question. Basically, you do get what you pay for. If you want a food chopper that will last a lifetime then pay the large sum for a Cuisinart or something similar, if you want a unit that you can use occasionally to chop your veggies and the like and do not want to pay a huge price then get a Crank Chop and take your chances. Still we are prepared to give this product a thumbs up.

Our Recommendation
As we stated above, you get what you pay for. Quality aside, the unit DOES do what it says. How long it will function is the question you have to ask. You may want to check out Slap Chop which was promoted by the same Company.

What do you think? Does Crank Chop work or not?