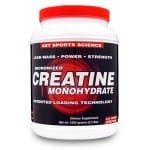 Bodybuilders are always looking to maximize their efforts in the gym and several use creatine in their pursuit at perfection. But does it actually work and should you use it? It is one of the few supplements that has stood the test of time and has been sold for roughly the last 20 years.

Overview
Creatine is found in low doses in high-protein foods and helps skeletal system build new muscle. By introducing larger quantities into the body, it is thought that the body will be able to build more of that muscle and to do it more quickly than it otherwise would.

It’s all very scientific sounding, but you must question whether all of this science actually finds its way into the products you buy, or if there is a gap between the research and development done in a laboratory, and what goes in to the actual product on the shelf.

For example, are the scientists conducting the tests on creating using the same type and grade that you’ll be ingesting? Probably not. So in theory, under controlled conditions, creatine may work, but does it translate to you stirring it up and drinking it down at home.

The Claim
Creatine will help you lift more weight, more times in the gym, and will help your muscles repair more quickly. It’s a similar claim as many muscle-gaining supplements on the market.

The Hype
Creatine came into the mainstream at the 1992 Olympics The hype was generated by many athletes claiming to use it, and many bodybuilders swearing by it, as a steroid-free way of making quicker, bigger gains in the gym.

The Cost
Creatine is quite costly, compared to other supplements. Part of the reason is the bulking phase that must be completed, wherein you have to take a lot of it at the beginning so your body stores it up in the system. Also, not all creatine is created equally, and if you go the cheap route you’ll likely get low-grade product and see limited results. To get the best results you’ll want to go with the high-quality brands with the best positive feedback from reliable sites.

The Commitment
Ingest the creatine either in powder or pill form. You’ll start by introducing larger quantities into the body at first, and then maintaining those levels afterwards. Once you stop taking creatine your body will flush it out of the system, and you’ll have to re-bulk if you want to start using it again. This means that you are committing to actively using the product for an extended period of time if you want to see continued results.

Evaluation
Although creatine has been found to be safe through long-term testing over the last 10 years it’s effectiveness is a little more sketchy. Some reports have shown that it can increase effectiveness of a high-intensity workout by 5-15%. Other reports show that there isn’t any difference at all in performance. If you’re thinking of using creatine to help with any sort of endurance training, you should think of an alternative.

Creatine has gone through plenty of testing and it has been found to be an effective and relatively safe way of getting the most out of your weight-lifting regimen. However, as previously noted, there is the chance that what has been tested and what you’re actually getting on the consumer side of things may be two different things, and not an apples to apples comparison.

This is one of those products that begs the question that just because it may produce results, should you take it? It is the great debate of risk versus reward. In the case of creatine the results for the average, casual user do not outweigh the potential risks in the form of damage you could do to your kidneys.

Our Recommendation
The vast majority of people, even those that are wishing to gain muscle, do not need creatine to get results. If you are an elite or professional athlete and you depend on your physique to pay your bills you might want to consider creatine as a way to give yourself an edge. For most of us mild-mannered weight lifting enthusiasts, there are other supplements that provide results without as much cost and side effects.

What do you think? Does Creatine really work?

← Previous Will Dime Curves Actually Give Me a Bigger Booty?
⚅ back to blog
Next →Does the Flex Belt Really Work to Get a Flat Tummy?