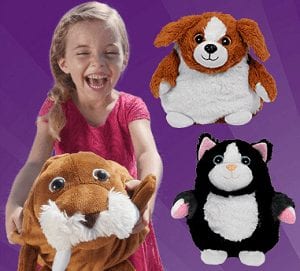 Well nobody really wants to mention it yet that it is soon going to be gift buying season, but we wanted to start featuring some products like Pop Out Pets to give early shoppers a better start.

Overview
Pop Out Pets is a furry and cuddly toy that can be transformed into three different pets. It is along the same lines as the Hideaway Friends that we featured before. Except in that case the friends focused on the super heroes. We did get some feedback that was positive so that gave us the incentive to bring you a review of Pop Out Pets.

The Claim
The company claims that with Pop Out Pets that the youngster will actually have three pets to play with. They are claiming that they are soft and cuddly and the kids are going to get a lot of enjoyment from them.

The Hype
For parents who want to choose a plush cuddly toy for the kids its sometimes hard to know which one to choose. The Pop Out Pets may make this easier because they are a three in one toy. So if the youngster doesn’t favor one of the pets most likely they will with one of the other choices.

The Commitment
The first thing you are going to have to do is decide on which collection you want. Is it going to be the dogs, fantasy,rain forest, kittens,or Ocean collection? You never know if this toy will become a real popular item. Then you may find that you need to purchase them all.

Evaluation
They really appear as though they would be a great toy for a variety of kids. You don’t have to worry about moving parts or batteries. This is just a simple toy like the ones kids choose to cart around with them. They soon can become a best buddy when its bed time or for traveling with. Aside from cuddling with them they are going to have a great time turning them inside out to expose a new buddy.

We’re going to give the Pop Out Pets a Thumbs up rating. One because the Hideaway Friends seemed to be well received. Another reason is because we checked out similar products and found that this type of toy is really popular.

Our Recommendation
If you are looking for a great toy for the toddlers on your gift giving list then this is reasonably priced and its like you are giving three toys in one.There always seem to be one toy that the kids end up favoring and they keep it this way for several years. The Pop Out Pets seem to fit right into this type of category. You may want to buy a few of them just in case you find that there are popular amongst the other kids in the family.

What do you think? Does Pop Out Pets work or not?