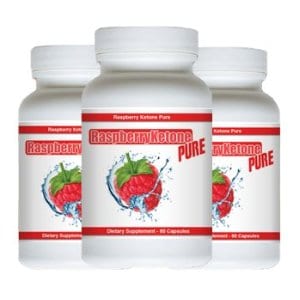 If you’ve wanted to get involved with the growing raspberry ketones trend, you probably have wondered if Raspberry Ketone Pure is worth trying. They say that it is not only full of raspberry ketones, but is mixed with other ingredients like African Mango and Green Tea. The thought is by mixing all of these popular weight loss methods together, they will create a Voltron-like mega-pill that will help you burn fat. But does this actually work, or is it just a good theory?

Overview
Raspberry ketones got a lot of attention when they were featured on the Dr. Oz show. While he didn’t specifically endorse a particular product, he did lavish a lot of praise on there and had an apparent health expert confirm the benefits of taking them. By leaving out a specific brand name, Dr. Oz left the door wide open on which company you should buy from. While this did make him look better by not appearing to be a corporate shill, it made it harder for the consumer to find a product that actually works.

The Claim
Raspberry Ketone Pure claims that you can burn fat with it, that’s it’s 100% natural, that it suppresses your appetite, that there’s no side effects and that it’s perfectly safe to take. They also say that it contains at least six additional ingredients including African Mango, Kelp, Apple Cider Vinegar, Grapefruit Extract, Green Tea Extract, and Acai Berries.

The Hype
The Dr. Oz show provided all the hype that was needed, as he emphatically stated how great raspberry ketones are, and basically recommended taking them immediately. Even though it was only a 5 minute spot on his show, it sparked a rush for everyone to go out and try it and see if it works.

The Cost
One month of Raspberry Ketone Pure is $50, or you can get 3 months for $100, effectively bringing your per month cost to $33. Shipping is just $7 which is pretty reasonable.

The Commitment
Raspberry ketones are in pill form, so they’re really easy to take, and should start working on their own with no change in your lifestyle needed in order to see results. However, you’ll see the best results by combining them with a proper diet and regular exercise, so it’s recommended to use this as a springboard to a healthier overall lifestyle.

The reason that you should follow a healthy eating plan, and get regular exercise in addition to taking a raspberry ketone supplement is that you’ll be able to get and stay motivated because the results will come at a faster pace than they would by just dieting and exercising alone. Most people that use a straight ketone supplement have reported that they don’t have any negative side effects, and that they were able to lose weight more quickly than they had in the past.

Evaluation
While it sounds good in theory, we don’t advocate taking a pill that combines so many different ingredients. Dr. Oz didn’t say to take raspberry ketones mixed with a lot of other different herbs and berries. He was simply talking about the raspberry extract, and that’s what the FDA was talking about as well, and what they added to the Generally Regarded as Safe list back in the day. African Mango and Acai Berry both have their fair share of controversy associated with them, and many people think that Acai Berries especially are just a big scam and never had the health benefits they claimed.

When you add something like green tea into the mix, you’re introducing caffeine, and that may or may not interact well with raspberry ketones. Grapefruit, kelp, and apple cider vinegar seem pretty harmless, and may provide some positive health benefits. There hasn’t been a lot of research done in regards to this combination, so it’s not recommended to try it out. Just because a product is all natural does not mean it is safe to take, so this claim is misleading. It’s all just detracting from the real magic here, which is the raspberry ketones. You’re getting the 100mg that was suggested on the show, but you’re also getting a lot of other stuff that wasn’t suggested on the show, and you’re ingesting it all at the same time, so your body is not going to process it the same way that it would if you took it on its own.

There are a few things that they got wrong with Raspberry Ketone Pure, and the first was that they took a good thing and added a bunch of stuff to it. They should have left it alone and focused on just one ingredient. While it may sound like a good idea to make a weight loss cocktail, it’s not something that is recommended, as many of the ingredients are controversial on their own and are basically just filler. Also, no studies have been conducted on how these ingredients interact with one another, so it is risky to try it out, even if they say it is safe.

Our Recommendation
While we do think that raspberry ketones is something you should try if you’re fed up with your previous weight loss efforts, we are not recommending Raspberry Ketone Pure, because it’s not really “pure” at all when it comes to providing only the ketones. We are recommending Raspberry Ketones Max, because it is straight up raspberry ketones, and it has the right dosage that was recommended on the Dr. Oz show.

What do you think? Does Raspberry Ketone Pure work or not?