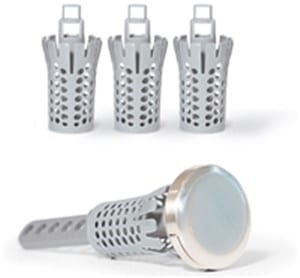 There are lots of drain cleaning products on the market and we usually resort to these after the problem occurs instead of using them as a preventative. It just comes down to finding the time to do this. A possible solution may be the Drain Stain which was designed specifically for bathroom drains that tend to get clogged up with hair.

Overview
The Drain Strain was developed by an ordinary human being (Naushad Ali), who grew tired of having to unclog bathroom drains because they were constantly getting jammed up with hair. He presented this on Shark Tank in 2015 and gleaned some interest from the sharks.

The Claim
Not only does the Drain Strain help to prevent the hairs from clogging your drain, but it also acts as a stopper for losing valuables down the drain which can be a common occurrence in the bathroom.

The Hype
The hype really focuses around being a simple problem solver that is affordable and it can be used by almost anyone.

The Cost
It is available in three different mediums which are nickle, bronze and chrome. These versions are available on the Drain Strain site as well as many other places. They average in price from around $15.99 for 3 baskets and come in different sets.

The Commitment
It really isn’t going to take much work on your part as all you have to do is place the Drain Strain into the sink and then clean it as needed.

Evaluation
If the Drain Strain can save you from having to pay a hefty plumbing bill then it is well worth the small investment. It is true that there are several similar products on the market. What makes the Drain Strain different is that the basket can be detached from the stem for easy cleaning. There is no messing around with having to remove the whole unit to clean then getting it back in place again.

The Drain Strain was obviously impressive enough to attract some of the Shark’s attention even though it was still in prototype when presented to them. It now also appears on Amazon as a fairly new product and has only accumulated 24 reviews, however these have give the product a 4.5 rating.

Our Recommendation
If you want to prevent drain problems especially in your bathroom then there would be no reason not to give the Drain Strain a try. There is some positive feedback to support it and its important to take into account the Shark’s opinion of it, although their take on a product is based on how much profit it will generate. We are going to give the Drain Strain a Try/Buy rating. If you happen to already have clogged drains or slow ones then before calling in the plumber you may want to try Turbo Snake. It has drawn some favorable attention to our review of it.

What do you think? Does  Drain Strain work or not?

← Previous Does the GB Pocket Stroller Really Work
⚅ back to blog
Next →Does the Ion Wireless Air Mouse Really Work?