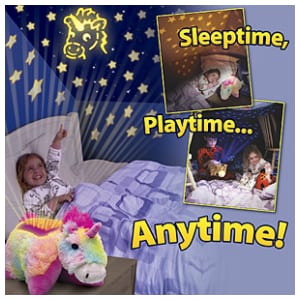 Dream Lites seem like they’d be a great way to combine a plush stuffed animal with lights that can either comfort or entertain your child as they drift off to sleep. They are getting some major TV time with their infomercial, so many people have been wondering if they are worth getting, or if this is an As Seen on TV product to avoid.

Overview
Bedtime training can be tough, especially when your child is afraid of the dark and is resistant to go to sleep. Establishing a routine is crucial, and if you can incentivize it, you create a reason for them to want to get in bed and get in the mindset of sleep time. When you can combine a nightlight with a stuffed animal, you might be on to something. This company already had initial success with their Pillow Pets brand, and are trying to pull off another round here by upgrading them with a light.

The Claim
Dream Lites claim that they light up the bedroom ceiling with stars and can replace a nightlight for those kids that are scared to fall asleep in the dark. They say that this makes bedtime fun, and that it has three color options, and has an automatic shut off so it’s not left on all night. The underlying claim here is that your child is going to love these, and that you’ll have an easier time getting them to sleep, and even that they’ll be excited and anticipate bedtime rather than resist it and try to push it away.

The Hype
These are getting so much airtime on TV it is hard to miss them. They make it look like your child will have so much fun, that it’s hard not to order right on the spot. But that’s what these ads are supposed to do, hype the product up so that it induces an order. Get too many faulty products and you become skeptical that they’ll work, or be as much fun as depicted on TV.

The Cost
If you order online you end up saving 25% off the advertised price shown on television. You can get them for $22.50 each plus shipping of $8, and $6 on each additional one you order. Compared to buying an ordinary nightlight this is rather expensive, but for something like this that illuminates the room with stars, and comes built into a stuffed animal, it’s not so bad.

The Commitment
These are pretty easy to use, and your child can do it yourself. You could show them how it works and add some special instructions like “If you’re ever feeling scared just turn this on and you’ll light the room up with stars” or something specially tailored to what your child would appreciate. If this works at getting your child to sleep sooner, you can expect to have several more peaceful hours to yourself instead of fighting with them to go to sleep, or having to stay in the room with them until they fall asleep on their own.

Evaluation
Dream Lites measures about 11 inches, so if you consider an 8 and a half inch by 11 inch piece of paper, it’s about that big. This makes it smaller than most people think it would be, because they are used by kids in the commercial so they look bigger. The nice thing about it is that you can switch it out between three different colors, which makes it more interesting and will keep your child engaged with it a little longer. It can be nice to ask them what mood they’re in that night and set the color accordingly. Or you can set it to rotate between the different colors for a very cool effect.

Dream Lites is getting our Try rating, based on the feedback it’s getting and the fact that some people might really like it, but others won’t. You’ll probably like it more if you were wanting this for its nightlight functionality, and not so much as a stuffed animal. It’s not very cuddly because of the plastic area used for the lighting. But it does a good job at projecting the stars onto the ceiling and really could be used to soothe a child. It’s also nice that it shuts off after 20 minutes so you don’t have to leave light on all night.

Our Recommendation
When it comes to bedtime, these can go a long way if you present it to them correctly. What you want to avoid is overstimulating them before bed, so you don’t want them to think it’s play time when they see a stuffed animal. But once they associate this with getting ready for sleep, it should do the trick. If you’re looking for more of a stuffed animal, consider getting a Pillow Pet instead.

What do you think? Do Dream Lites work or not?

← Previous Do CigReds Really Work?
⚅ back to blog
Next →Does the Edge of Glory Knife Sharpener Really Work?