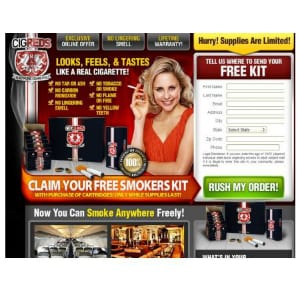 CigReds is an electronic cigarette that is supposed to mimic the look, feel, and experience of an actual cigarette. They say that you can smoke this in places where you wouldn’t be able to smoke a cigarette, and some people use it to help overcome an addiction to smoking. E-cigarettes were all the rage a few years back, but do they actually work the way they say, and does it provide the same sort of satisfaction as smoking does?

Overview
There are basically two ways that you can use an electronic cigarette. You can use it in lieu of your regular cigarettes in places that don’t allow smoking to hold you over until you get into an area that is okay to smoke in. Or you can use them as a smoking cessation method, whereby you switch out your traditional cigarettes with this e-cigarette and try to get the same sort of satisfaction from it so that you can overcome your cravings and kick the habit.

The Claim
CigReds claims that their product does not contain any tar or ash, that there isn’t any carbon monoxide in it, and that you don’t get that lingering smoke smell that you usually get from cigarettes because there is no tobacco or smoke involved in this. It doesn’t have a flame or any fire, and it won’t make your teeth yellow the way cigarettes do. They also say that you get a one-year warranty with this, and that you can smoke anywhere you want, even in places that don’t allow smoking.

The Hype
E-cigarettes have pretty much reached their peak as far as popularity goes, and it seems that most anyone that wants to try it out has already done so. For as much attention that is received, it is hard to find anyone in the real world that is actually using them. They say that you can smoke this on airplanes, but it is hard to spot anyone actually attempting to do so. So while some of the claims may be promising, it seems that electronic cigarettes just haven’t caught on and have pretty much run their course.

The Cost
For $100 you can get a one month supply of CigReds cartridges, and include a starter kit so that you have everything you need to enjoy your first smoke. You can also opt for the more deluxe kit for $150, that gets you three months worth of cartridges plus a bonus kit that includes teeth whitening and some herbal remedy for your lungs. They say this is so that you can begin to recover from the negative effects of smoking. Comparing this to a pack a day habit and you’re definitely coming out on top, especially when you consider the health benefits involved.

The Commitment
Many smokers find it hard to make the switch over to an electronic cigarette. As close as it might be to the real thing, it’s not, and there is no real way to get around that fact. So you might need to take some time to acclimate yourself to the differences between smoking an e-cigarette, and what you’re normally used to. However, any cigarette you don’t smoke is going to be better for your health, so even if this just replaces some of your cigarettes you’ll be doing yourself a favor.

Evaluation
The thing about CigReds is that they do contain nicotine, so if you were looking to quit both smoking and nicotine this isn’t going to work for you. You could use it as a way to step down in stages, first taking care of the habit of smoking cigarettes, and then taking yourself off of the nicotine. They have it set up so that you can try five cartridges, and still be able to return it if you don’t like the experience within 30 days. This should give you enough opportunity to experience what it’s like to smoke an electronic cigarette.

E-cigarettes have both a short term benefit as well as a long term benefit. That’s why they deserve some serious consideration, and finding the right one is important. If you buy one that doesn’t quite provide the right experience, the chances are you won’t use it very much, and will end up resorting to real cigarettes. You can tell a lot of research went into this model, and social feedback suggests that it does the job.

CigReds are getting our Solid Try rating based on the amount of positive feedback they’ve been getting from people that try it out, and also because of the experience they provide, and how close they come to replicating an actual smoking experience. The longer you’ve been smoking, the more discerning you’re going to be about switching to an electronic cigarette. You’re going to want the same look, feel, and taste that you’ve become accustomed to, or you’re going to feel shortchanged. They’ve done a good job of re-creating the experience, and allowing you to do it wherever you want.

Our Recommendation
We’re still a little skeptical that they would let you smoke one of these on an airplane, but in other places it shouldn’t be a problem, and if you are really feening for a cigarette this can get you by until your next opportunity to have a real cigarette. If you are trying to kick the habit, you can try this out as a way to break yourself from the dependence of buying smokes and the habit of lighting up a cigarette.

What do you think? Does CigReds work or not?