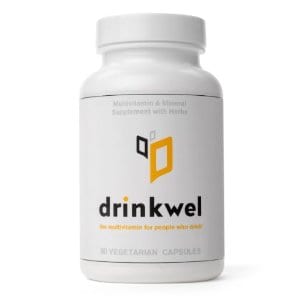 Drinkwel Vitamins claim that they were specially formulated by UC Berkeley grads to contain all of the things that are needed for the drinker’s lifestyle. Hangovers just aren’t any fun, and early reports are showing that users say this makes them go away. Could they really have cracked the hangover code?

Overview
It’s no secret that drinking takes its toll on the body. All sorts of problems occur from drinking just one drink, but a typical night involves drinking more than the body can handle to get a buzz, or to really party it up. The excessive drinking impairs more than just your ability to drive, it’s also very detrimental to almost every system in your body, from the digestive system, to the circulatory system, even your neurological system.

The Claim
Drinkwel Vitamins are made to be taken daily, even when you’re not drinking, and then you’re supposed to take an extra dose of it before you go to bed after a night of drinking. The ingredients used are supposed to help keep your liver healthy and functioning properly, and help it digest and process the toxins that are introduced to it when you drink. Most drinkers know that the liver is responsible for filtering and processing the alcohol, but they’ve also included antioxidants that are meant to cancel out free radicals, as well as vitamins for energy and a healthy immune system.

The Hype
The hype is that even though they specifically state in their disclaimer that their product doesn’t help “prevent intoxication, alcohol poisoning, alcohol abuse, or utter stupidity” it does act as a non-deterrent to these activities. Hangovers are nature’s way of saying you’ve gone too far, maybe you want to scale it back a bit next time. If you’re pretty sure you’re not going to have the ill effects the next day, it’s only logical that you would push past your body’s danger signals and drink even more than you normally would in the first place.

The Cost
A bottle of Drinkwel Vitamins goes for $40 for a one-month supply. This is pretty reasonable, although if you go out multiple times a week it won’t last you quite a month because you’re supposed to take three per day, and then an additional three when you consume alcohol. You’re bound to forget to take them every once in awhile, especially if you’re not drinking and feeling fine, so it probably will end up lasting the month. They’ve also got a sample pack that you can try that gets you two servings for just $3 shipping.

The Commitment
These are meant to be taken daily as a multivitamin, and then you take three more of them before passing out for the night. The biggest commitment on your part is to remember to take them. This is not the easiest task if you’re drunk out of your mind and stumbling around your bedroom. This is the number one problem people are reporting, and is a legitimate complaint with the way the process works.

Evaluation
Drinkwel Vitamins do contain a lot of good things for your body, and the liver does have the ability to repair itself if it encounters problems. However, you shouldn’t get into the habit of repeatedly damaging it, as it’s one of the most vital organs of the body, next to the brain and the heart. The liver helps both your brain and your heart function properly, so you are really doing a number on your overall health when you flood it with toxins and severely dehydrate yourself.

Loading up on these vitamins, antioxidants, and nutrients is one way to build up a reserve that your body can use up before eating away at your natural supply. If you currently don’t take a multivitamin, this could be one major reason why you get hit so hard by the symptoms of a hangover. You should also be sure to drink water before, during, and after your drinking session. This can be one of the harder things to remember, but can also help you out considerably the next day.

Drinkwel Vitamins are getting the Thumbs Up rating from us based on the all-natural ingredients used, the overwhelming positive feedback, and the fact that there’s a reason and some science behind what they’re putting into it. This may be one of the first peer documented hangover prevention methods around. There are a lot of old wives tales and stories about how people deal with hangovers once they’ve already got them, but the new theory is to just prevent them altogether. This will likely get more popular as more people discover it, and with the trial offer in place it’s easy enough to give it a go.

Our Recommendation
Treat yourself well. It’s great that you’re a reveler, but later in life you might end up wishing you’d scaled things back a bit. Binge drinking and drinking to get super drunk are fun for a while, but eventually you realize that you can have just as good of a time without drinking quite so much, and your body will thank you. It’s always a good idea to give your body the things it needs to function at its best, and if drinking is a part of your lifestyle you should add these to your daily routine as they’ve been proven repeatedly to do the job.

What do you think? Does Drinkwel Vitamins work or not?