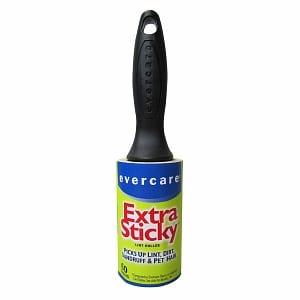 The Evercare Lint Roller is trying to reinvent the word sticky. Apparently it is so sticky that it can not only lift lint and pet hair off of your clothes, it’s sticky enough to lift various items as a test. When it comes to a lint roller, sticky is the key, so they may have figured out the proper equation to producing top-quality rollers. Let’s see how well it stacks up to other products claiming to be just as sticky.

Overview
Lint rollers definitely come in handy when you’re trying to look your best. A linty wardrobe is a sign that you didn’t take time to analyze your appearance in the mirror, and fix minor problems. It shows an attention to detail, and just makes you feel good to know that you’re impeccably dressed. If you’re using it around the home, it’s a great way to keep carpets and bedding hair free, so you don’t have to vacuum as much. Pet hair can really clog up a vacuum in no time, so it’s nice to go over things with a lint roller first, so there’s less bulk to pick up later.

The Claim
The Evercare Lint Roller doesn’t really over exaggerate the things it can do, like some lint rollers in their infomercials. This is basically an old-school style roller, with its number one feature being just how sticky it is. So is this enough of a draw to get people to use it, and be happy with the results they get?

The Cost
You can get an Evercare Lint Roller, plus 12 replacement roles for $21 at Amazon. That’s the one big hang-up to a standard lint roller: eventually you’ll run out of rolls, and will have to reorder if you want to keep using it. This represents an ongoing cost that can really add up if you are a habitual roller.

The Commitment
Since this is not reusable, you have to commit to buying the replacement roles when you run out. This is one drawback to using a traditional style in roller. The tape strips get filled up with hair and lint, become less and less sticky, and then you need to remove them and toss them in the trash. There are new lint rollers coming out that can simply be washed off and reused, avoiding the need to buy replacement packs.

Evaluation
Most people that try the Evercare Lint Roller have good things to say about it. The number one thing they say it has is its ability to have things stick to it so well. There are plenty of generic lint rollers that make you go over the same spot again and again and again, trying to get that one piece of lint that won’t come off. It can be very frustrating, and can actually end up ruffling your suit or blouse, creating a situation that’s even worse than the one you were trying to fix.

So when something like the Evercare brand comes around, and allows you to pick up lint and hair and fuzzies all in one swipe, it pretty much replaces the old lint roller you are using and finds a permanent residence on your dresser. We’d love to see them come out with a reusable model, with the same wildly sticky surface, only with the ability to wash it off, dry it off, and keep going with it.

The Evercare Lint Roller is the way to go if you’re going to go the conventional way of lint rollers. However, if you want to try one of the new reusable sticky rollers, we recommend giving a try to Sticky Buddy. It is just as sticky as the Evercare models, but once it gets hairy or linty you just run it under the faucet, wash off what’s stuck to it, let it dry, and you’re good to go again.

Our Recommendation
Very few times will a product be the be-all end-all that you need in your home, and you’ll end up with a combination of different products to get the job done properly. You could end up having an it’sEvercare lint roller just for your clothes, and a Sticky Buddy for big spills like cereal, or tough and frequent jobs like dog and cat hair.

What do you think? Does the Evercare Lint Roller work or not?

← Previous Does the H20 X5 Steam Mop Really Do Five Different Things?
⚅ back to blog
Next →Does the Nostalgia Electrics Cake Pop Maker Really Work?

13 Customer Reviews on “Does the Evercare Lint Roller Really Work?”