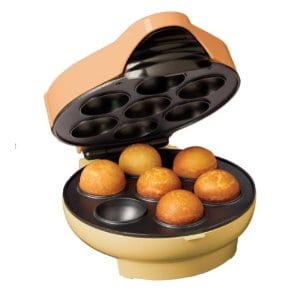 If cake pops are what you’re after, the Nostalgia Electrics Cake Pop Maker says it can get the job done. It also says they can make donut holes, you just need to use different batter. Cake pops are the hottest dessert items right now, and they are a lot of fun to make and decorate as a family bonding experience. So does this unit really work to make delicious cake pops, and do they come out looking like the ones he seen being sold around town?

Overview
If you’re just discovering cake pops, where have you been? These are round bite sized pieces of cake, each decorated with their own serving of frosting, so you don’t have to worry about which piece of cake you get, as they all look and taste the same. You also don’t have to worry about stuffing your face with too much cake, as they come pre-portioned in smaller sized servings so it makes a perfect guilt free dessert. These retail for ridiculous amounts at local bakeries, so of course companies have come out with ways you can do it yourself at home.

The Claim
Nostalgia Electrics Cake Pop Maker says that it can cook delicious cake pops as well as donut holes and even various pastries without the need to use your oven. With their recipe book, they say that you can make different flavors of cake pops, and even stuff your donut holes with jelly, make something called puff pancakes, and even rival your local Cinnabon with mini cinnamon rolls. This is because it comes with an injector that delivers feelings inside of the finished pastries. It also includes a decorator so that you can make your creations look as good as they can. Best of all, they say that it cooks them faster than conventional methods.

The Hype
The hype is that we’re talking about a dessert here, but people have been really going gaga over cake pops, and the thought of making them at home is too appealing for many to pass up. Also, Nosolgia Electrics is known for making cutesy foods like this, and also fondue fountains, and popcorn makers – basically anything that takes you back to feeling like a kid again.

The Cost
Nostalgia Electrics Cake Pop Maker is $25 at Amazon. This makes it pretty comparable in price to other cake pop makers in its class.

The Commitment
You have to be really be into your desserts, or love the idea of making your own cake pops in order to see this one through. Compared to using a cake pop tray that goes into your conventional oven, this represents a way to avoid heating up the whole kitchen just to make dessert.

Evaluation
Nostalgia Electrics Cake Pop Maker is getting good reviews from those who have tried it. One thing that keeps getting brought up is that these cake pops are going to be bigger than the ones that you might be used to. There are other models out there that make a dozen cake pops at once, and they are smaller in size. This one makes seven cake pops, and they are of the larger variety. So whether you’d rather have fewer larger cake pops, or more smaller-sized cake pops is up to you.

One thing that should be noted is that if you’re making donut holes, you won’t be frying them, so they’ll actually be healthier for you than the store-bought variety. In many ways this is a healthier option for you than manufactured goods, because you have more control over the quality of ingredients that you use to make them. You could buy organic cake mixes and use them in this to have a more natural dessert. You can also buy the expensive chocolate and have a sinfully delicious moment of Zen.

The Nostalgia Electrics Cake Pop Maker can be put on your shortlist of models to consider, but be sure to check out all of your options first. There are several different ways to go about this, and there are even companies that provide a sort of community based around the love of making cake pops. Babycakes has a way for users to submit their own favorite recipes, so you’ll never be at a loss for what to make with your device.

Our Recommendation
After comparing several different models of cake pop makers, we’ve decided that the Babycakes brand is the best cake pop maker out there. It makes cake pops a dozen at a time, and they’re the size that you’re probably used to seeing. The results you get with it have been verified by plenty of users, and it also makes donut holes so it’s not like you’re sacrificing anything by going with this one instead of the Nostalgia brand.

What do you think? Does Nostalgia Electrics Cake Pop Maker work or not?

← Previous Does the Evercare Lint Roller Really Work?
⚅ back to blog
Next →How Well Does the George Foreman Grill Really Work?