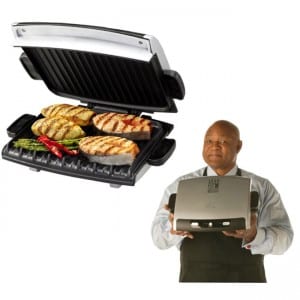 The George Foreman Grill was the undisputed king of electric grills for several years. Nowadays it still reigns supreme but there are plenty of competitors vying for the title. Now that all the smoke has cleared, let’s see exactly what makes this grill so special, and try to analyze what got people into such a frenzy in the first place.

Overview
The grill itself was one of the first to market with the dual cooking surfaces. Of course there have been Panini sandwich makers around for decades before this came out, so it’s not like they invented the concept of heating food from both sides. What they did do though is expand the realm of what you can cook in a press like this. They also did a fantastic job of driving home the fact that by cooking all sides at once you are reducing your cooking time. And by giving it the tilt and letting the fat drain out, they created the perfect storm for consumers.

The Claim
The George Foreman Grill claims that you can cook fast meals with less fat, but still have great tasting food. They claim that it is non–stick, easy to clean, and that because it cooks from both sides at the same time, you end up saving time. These might not seem like revolutionary claims, but when it first came out it was really something special. At that time there wasn’t anything else in its price class that even came close. By adding George Foreman as the spokesperson, they delivered a knockout punch. He had put on some weight towards the end of his career, and to show him slimmed down, and promoting a new, flashy grill made people think he used this to lose weight. And as it turns out, he’s a pretty good pitchman, too.

The Hype
The hype has died down considerably, but at its peak this was the most talked about grill on the planet, and is still ingrained in people’s minds as a way to cook without so much fat.

The Cost
George Foreman Grills range in price depending on which size you go with. For a few examples you can get an individual-sized model for $20, or go family size for $30, or you can go next generation with all of the bells and whistles for more than $70.

The Commitment
This grill should reduce the amount of time and effort you have to put into creating meals. By cooking the top and the bottom of meats like chicken breast, the cooking time is cut almost in half. Also, it can grill and cook vegetables quickly, so you can have a well-rounded meal in no time.

Evaluation
The George Foreman Grill lives up to its hype, and this is why it sold so many units. Foods actually come out of it cooked well, and without the fat content that it normally would have if you cooked it in a frying pan. Of course another feature that can’t be overlooked is how great this is for cleanup, since it has a non-stick coating all the way around the plate. It comes with a special cleaning brush as well, so you can get anything that does manage to get stuck between the grill lines. If you have a unit that has removable plates, it makes it a little easier to just pop them off and clean them off real quick with the rest of the dishes.

Non-Sticking and Moving
The company behind George Foreman grills hasn’t rested on its laurels. They’ve now got grills with multiple plates to them, so you can do different things than you can with their single plate grills, like make waffles, and even bake things. Of course, all of these plates are still going to feature the non–stick ability that the grill was originally famous for. It’s up to you how far down the rabbit hole you want to go, because they’ve got grills that can do things you wouldn’t believe they could do, and they’ve evolved over the years, improving upon their already successful original grill.

America’s Favorite Foods on the Foreman
One of the best things to cook in a George Foreman is chicken breast. This is because you want to make sure that the meat is cooked all the way through, and when you bake it or pan fry it it seems to take forever to get the center to go from pink to white. But with this grill, it’s getting attacked from both sides so you don’t even have to flip it, before you know it is cooked just right all the way through, but is still tender and juicy, but doesn’t have all of the fat that it would have if you had to put in a frying pan and cook it in a pool of oil.

A great thing is that you can take frozen chicken breast right out of the freezer and place it onto your George Foreman grill, and as it cooks, the water just drips into the fat tray so you can cook it from frozen in no time at all.

Another favorite item people cook with their George Foreman is hamburgers. These are another one of those items that can seem to take forever to cook all the way through. If you like your burgers rare you won’t have to wait long for it to get brown on the outside with a little bit of pink in the middle. If you’re cooking them well done you won’t have to wait long either, and before you know it their cooked all the way through and ready to eat. You get all the taste, but a lot of the fat will have drained to the drip tray, especially if you are cooking with 80/20 ground beef.

Even though we’re a little bit tardy for the party, we’re giving our nod of approval to the George Foreman Grill and jumping on the bandwagon of people that say it works great. When it comes to an old standby that you can rely on, you can’t beat the original. But if you want a versatile grill with more features, you should look into their multi-plate options, and think about putting some money into this, sort of like an investment in healthy eating.

Our Recommendation
We recommend going with a size that fits your needs best. They make George Foreman’s in all different sizes, so if you’re living alone you can get a personal sized one, if you’re a couple you can get one built for two, and if you’ve got a family to feed they have extra-large grills that can cook an entire meal’s worth of chicken, hamburgers, and anything else you can think of for the whole family.

If you want to make things like waffles, or bake things like cakes you want to go with one of their next generation models, some of which come with up to six plates so depending on what you’re trying to do with it, it should be able to accommodate your requests. They still make the single plate classic, so don’t worry if you just want to keep it simple and use it to make foods like chicken breasts and burgers.

What do you think? Does the George Foreman Grill work or not?

← Previous Does the Nostalgia Electrics Cake Pop Maker Really Work?
⚅ back to blog
Next →Does the Wilton Giant Cupcake Pan Really Work?

22 Customer Reviews on “How Well Does the George Foreman Grill Really Work?”