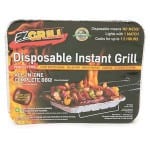 Wondering how you can bring the grilled food taste to a camping trip or a tailgating party, and thinking of the EZ Grill? This is the portable charcoal grill that you can totally toss in the garbage when you’re done. But does it work the way you’d think it would, or is this product a flop?

Overview
Barbecued food is delicious, but lugging a grill around is not an option many times. So it only makes sense that a company would make a portable and disposable grilling unit. Such is the case with the EZ Grill, it’s designed to handle a good amount of food, and to stay hot long enough to grill just the right amount to feed a small gathering.

The Claim
The makers of EZ Grill claim that you can light their grill with one match and cook up to one and a half hours on it. They also claim that when you’re through you can dispose of the entire unit and just buy another one for next time. They say you can now grill anytime, anywhere. All you need is their system and a lighter or a match.

The Hype
There’s not a lot of hype surrounding this product. It’s got basic claims that are easy to test out in a real life trial, and there are many instances when you’d want to use it. Namely, you can have grilled food at a picnic, or at a tailgate party.

It also makes sense on a camping trip because it’s very light and you can pack it up and dispose of it as soon as you get out of the woods.

The Cost
The EZ Grill is just $10 from the official site, which is reasonable. You can even find it for less in stores if you know where to look.

The Commitment
There’s not much involved in using the EZ Grill and if you buy one without a specific even to take it too, sooner or later you’ll come up with a reason to use it, it just makes that much sense.

Evaluation
Some of the tastiest burgers I’ve ever had came from using an EZ Grill. There was no charcoal taste or any lighter fluid taste that you might expect. They must have devised a charcoal that lights easily and burns cleanly without leaving a lot of residue on the food above.

Cleanup was a breeze, all you have to do is make sure that the coals are fully extinguished before you start folding it up. It’s made out of a thin enough aluminum that it all just crumples onto itself when you’re done. Just fold it up and it remains self contained. It’s recyclable so you can put it with the other metal items that you’re recycling.

When you recyle your EZ Grill it gives you those good feelings knowing that you’re not polluting the Earth, and you still get to eat delicious food.

Does the EZ Grill Really Work?

Yes, overwhelmingly so. It makes tasty burgers, hot dogs, and chicken breasts. You can also use it to make grilled veggies. There are some things you’ll want to avoid cooking on it, like anything that’s designed to be slow roasted.

You only have a short amount of time in which the grill remains really hot, hot enough where it’s actually going to cook the food. It’s great for smaller items like veggies and smaller cuts of meat like burgers and dogs.

Some of the items we recommend for the EZ Grill are hamburgers, cheeseburgers, hot dogs, bratwurst, green peppers, asparagus, boneless chicken breast, fish, and mushrooms.

Things we don’t recommend cooking are baked potatoes, steaks, chicken with bones in it, and anything else that needs to be on the grill for a long time in order to get properly cooked. Save these for those times when you are at home and can use the main BBQ unit.

Our Recommendation
Pick up an EZ Grill the next time you see one, you won’t be disappointed. You can really grill anytime, anywhere just like their slogan says. You’ll likely find yourself coming up with all sorts of excuses to use it, so you can have a nice, juicy grilled burger.

What do you think? Does the EZ Grill really work?

← Previous Does the Omni Dual Saw Really Work?
⚅ back to blog
Next →Does EZ Cracker Really Work?