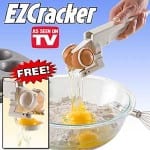 If you’ve ever been frustrated when cracking an egg and wished for a better way, you probably wanted to buy the EZ Cracker. In the ads it definitely makes it look pretty easy, you just insert the egg, press the button and it ends up in the bowl with just the empty shell remaining. But can it really be this easy?

Overview
Nothing is worse than crunching on a bit of egg shell, either in your scrambled eggs, or in a baked good that needed an egg or two. It often comes as an unpleasant surprise when you’re chewing it up. Eggs can be a nuisance to crack, because they tend to get themselves all over the counter if you crack them on it.

Also, it can be tough separating an egg so that just the white goes into a bowl. This involves moving the yolk back and forth between the halves of the shell.

Another pain in the world of eggs is trying to peel hard-boiled eggs. The shell tends to stick to the egg and make it harder to peel off.

The Claim
The makers of EZ Cracker say that it will make it very easy to crack eggs, and even separate them with the included attachment. They even throw in a bonus gift that says you can scramble an egg inside the shell so it comes out ready for scrambled eggs, or make a hard-boiled scrambled egg.

The Hype
The hype is from just how hard they make it seem to crack an egg. They show what must be a total klutz smash an egg all over the stove, and repeatedly show a woman picking bits of egg shell out of her meal. While it is a sometimes messy step that sometimes leaves bits of shell behind, it’s not as bad as they make it seem.

The Cost
EZ Cracker is advertised at $20, but you can get it much cheaper than that these days. You shouldn’t spend more than $10 on it, and some have reported finding it at dollar stores. Sometimes they package it with the EZ Egg Scrambler, and sometimes it comes with the Bacon Wave, depending on where you get it from.

The Commitment
In order to get your money’s worth, you’d have to use the EZ Cracker any time you make eggs, or use them in a recipe. If you find yourself going through a lot of eggs, and you also find a lot of egg shells in what you’ve made, then you might notice some improvement with this device.

Evaluation
When compared to the traditional way of cracking an egg, the EZ Cracker does seem to make things a little easier. But this only occurs once you’ve taken the time to break out the gadget, get the egg positioned correctly, and get the shell out of it so you can do another one.

So while it may make the process more standardized, it definitely doesn’t reduce the time it takes to crack an egg. So depending on what you consider easy, it may or may not live up to its namesake.

EZ Cracker performed well under testing. For the regular cracking of an egg, it worked just as advertised. For separating an egg, it did an okay job. For use on a hard boiled egg it didn’t perform the way it did on the ad, and it took a lot of peeling by hand to remove the shell.

Our Recommendation
You may have noticed that the commercials on TV exaggerate just how hard cracking an egg is. If they’ve roped you in to this way of thinking, you might just need to snap out of it. Cracking an egg is an essential part of cooking, so you should focus on it, and try to get better at it. Like all things, you’ll get better with practice.

If you just can’t get the hang of it, you could spend the money and get an EZ Cracker. It will be a little more time consuming, but you won’t have to think to hard about what you’re doing.

What do you think? Does EZ Cracker really work?