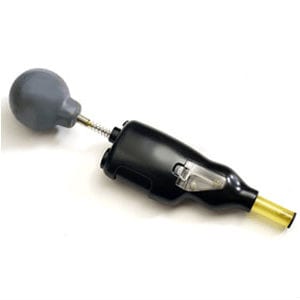 The EZ Nailer is a way to drive a nail right where you want it to go without using a hammer. This would come in handy if you’re remodeling or just don’t want to smash your fingers anymore. But does it work?

Overview
There are tons of problems with the old hammer and nail way of putting nails in. First, a hammer is rather heavy and bulky so it’s sometimes hard to hit the nail right on the head. Also, when you’re trying to nail in a tight spot it can be really difficult to get it right where you want to.

The Claim
The makers of EZ Nailer say that it was engineered for use by commercial contractors, which means it should stand up well to residential consumer use. They say it takes away the need for a hammer and that it’s a quicker, safer alternative to using one. They also say that it places the nail right where you want it to go and makes it so it doesn’t change its position.

The Hype
If you’re like most people you probably don’t have a need to hit a nail many times per day, week, or month. There are likely only a few odd jobs around the house that you’ll need this for, so the problem isn’t exactly a huge one, but rather one that needs to be brought to your attention so you realize you need a solution.

The Cost
The total cost for two EZ Nailer kits is $31. The cost breaks down to $15 for one unit, but then you have to pay $8 to have it shipped, and they force you into a second one and make you pay another $8 shipping for it. Even at the price of $31 there isn’t anything else out there that comes close to this price and does what this does, so it’s not a bad deal you’re getting here.

The Commitment
You’ll have to come up with ways to use this, and they give you a few possible instances. They say you can use it to hang up picture frames and other decorative items around the home. They also say you can use it for edging and molding which requires plenty of nails to install. You can also it for paneling and chair rails, or any other instance where you need a nail.

Evaluation
Since they’re saying this is like having a nail gun right in your hand, it should function like a nail gun would. This means that you should be able to drive the nail in quickly and efficiently and have it go right where you want it to. Compared to using a hammer it’s easy to see the lure to this. If you have the memory of smashing your fingers instead of hitting the nail as intended, you will already be sold on a gadget like this. If you’re a handyman then you probably will grab one of these for your toolbox, and if you are a DIY enthusiast it will be a nice fit too.

The way this works is pretty smart, making it so that the nail doesn’t get away from you, and you don’t have to hold the nail with your fingers. We tried looking for another manual nail gun, but came up empty handed. It seems like you are stuck between pain $200 or $300 for a full sized nail gun or your start using a hammer and nails.

The EZ Nailer is getting our Solid Try rating. There just isn’t anything out there at this price point that comes close to providing the ability to drive nails like this. On top of that you’re getting a pretty good offer here, getting two units for the price of one, and making it so that you have a backup in case one breaks, or you can get two people on one project to make things go faster.

Our Recommendation
If you’re looking for a way to hammer nails into your wall without hurting yourself, this might be the best way to go. It seems to do a good job of keeping a nail in place so that you don’t have to worry if its in the right spot or not. Nail guns are big bulky expensive and can be dangerous, and this is the first product that we’ve seen that tries to replicate what a nail gun does. At this price point you really can’t go wrong because at the very least you’re going to get a device that replaces your traditional hammer.

What do you think? Does EZ Nailer work or not?

← Previous Does the Buddy Light Really Work?
⚅ back to blog
Next →Do Rivet Strips Really Work?