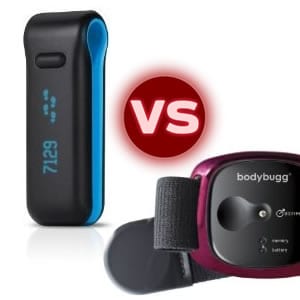 The FitBit vs BodyBugg debate rages on, with both devices offering users a way to digitize their fitness activities and overall health. They both have roughly the same purchase price, and some similar features, so it’s really a matter of determining which one will give you the best overall experience.

The Tale of the Tape
Motivation to work out is one of the hardest things to muster up, and there are not electronic gadgets that are promising to get us up and moving more often. The theory is that if you can get an objective view of your accomplishments you’ll be more inclined to put up good daily numbers. They’re also trying to make being active into a game, or to make it more interesting by equating your accomplishments into more fun or exciting feats, like climbing Mount Everest. But which of these two devices provides the best value for the dollar?

FitBit Recap
We did a full review of the Fitbit which you can check out to get the entire story. They seem to be taking a Web 2.0 approach to fitness, making everything user friendly and easy to operate through wireless connections. This means that the data should automatically sync up so you’ll always have your fitness info handy, either on your desktop or through your mobile device with their app.

BodyBugg Recap
BodyBugg is produced by 24 Hour Fitness and says that it can track your calorie intake and expenditure, your exercise routines, and will let you know if you’re running a caloric surplus or deficit. They say that by knowing if you’re consuming more calories than you’re burning off, or vice versa, you’ll always know if you’re on the right side of the fat-burning or weight loss equation. They say it’s very accurate, getting things right about 90% of the time. They also say it’s been featured on daytime TV shows, and reviewed in major newspapers, for whatever that’s worth.

Cost Comparison
The Fitbit system weighs in at $100 for the “One” which is the one we’re using for the comparison. The BodyBugg is $115 for their “version 3” model, and includes a six month subscription to the online service that makes it work. It’s $7 a month after the 6 months is up. In this regard Fitbit wins the round by being less expensive on the initial purchase, and then not requiring a monthly subscription to continue using it.

Where They’re Similar
Both offer a way for you to have portable fitness devices that can track your activity so you don’t have to do it manually. They say that you can’t get to where you want to be without knowing where you are or where you’re going, and it’s really hard to take an objective look at your progress. Without these, all you may have to go on in the initial weeks or dieting and exercising is the way you feel, which can fluctuate from day to day. But having a computerized readout of what your efforts are attaining should keep you on track, and help you through the times you want to quit.

Where They’re Different
BodyBugg is mainly geared at counting your calories, and Fitbit is more geared towards keeping track of your various activities. While it’s not a truly apples to apples comparison, you should be able to choose one and be happy with it and not regret purchasing the wrong one. What you’re really looking for here is the one that will help you reach your fitness goals more efficiently and effectively. This means it has to give you the right mix of technology and usefulness, as well as be easy to use because if it’s too hard to use you won’t end up using it for the long term.

FitBit vs. BodyBugg: The Final Match-Up

While BodyBugg has some nice features to it, they just don’t seem to have all of their technical ducks in a row the way that Fitbit does. Many users report having difficulty getting their site to work, and criticize it for being so web-based. Even the fact that you have to wear two devices to use the BodyBugg system, and only one device to use the Fitbit system makes a big difference in convenience and comfort.

The Fitbit unit also has many more features than the BodyBugg, being able to track your sleeping patterns, how many calories you’ve burned, and how many steps you’ve climbed. If you get the Fitbit scale you’ll be able to track your body fat percentage and body mass index (BMI) to have a clear view of your progress as you go along. This can provide a nice view as the lines on the graph head downwards, and can provide motivation for you to continue that downward trend.

When you size up the user reviews each unit has been getting, you see that the Fitbit gets the Thumbs Up, while many give the BodyBugg the Thumbs Down. Some common complaints with the BodyBugg are that the online system is complicated and takes too much time to get it to work, while some common praise for the Fitbit is that it just works, and that it adds fun to what is otherwise thought of as mundane or boring exercises. People also like that it works with other websites, and of course that it’s free to use their online features.

And the Winner Is…
Fitbit gets the win on this match-up, and provides the better overall experience in personal training computer peripherals. Here are the knock-out blows: No subscription required, only one unit to wear, better syncing between the unit and your online account, and lower initial price. But if you’re serious about getting technological about your fitness you may want to consider getting them both, because where Fitbit tracks your exercise and activities better, BodyBugg will help you get your calorie information in order. But that would be a lot of gadgetry to keep track of so it wouldn’t be feasible for most.

What do you think? Which Works Better Fitbit or BodyBugg?

← Previous Does the Squatty Potty Really Work?
⚅ back to blog
Next →Does ScalpMed Really Work?

Customer Review on “FitBit vs. BodyBugg: Which Works Better?”