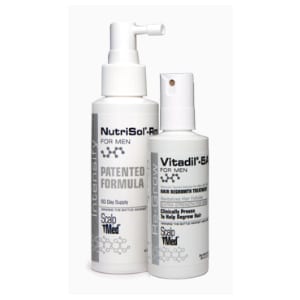 ScalpMed comes in two types, one for men and one for women, and says that it’s clinically proven to target the cause of your hair loss. We all know that the results you see in TV promos are not typical, but they are still very persuasive. That’s why we looked further into this to see what the details are, and whether or not you can expect it to work.

Overview
Losing one’s hair can be a traumatic experience, and out of desperation you might be tempted to try just about anything. Manufacturers know this and so they’re always bringing to market possible solutions that sound plausible. They know that all they have to do is create a shred of hope and they can make a sale. That’s why it’s best to tread lightly when evaluating any hair loss product, take the claims with a grain of salt, and research the active ingredients listed to see what the general consensus is.

The Claim
The makers of ScalpMed claim that they’re treating the cause of hair loss right at the source, which we’re guessing they’re saying is the scalp, since that is where the products are applied. They also say that you won’t need hair transplant surgery, wear a toupee, or experience any sexual side effects from using it. They say that they guarantee the results, but after further research it appears that you only get 30 days to try it out, not 60, and they only accept unopened packages, so you won’t get a refund on the products that you’ve tried.

The Hype
There’s always hype involved with products that say they fix hair loss. With this one they add to it by saying that their formula has been patented, which indeed checks out, but patents are for products that are unique and novel, not necessarily ones that work. Basically they’re selling Minoxidil mixed with other ingredients, so they’ll need to hype it up enough for people to think it’s going to give them different or better results than using Minoxidil.

The Cost
The cost is what raises the most concern. While ScalpMed might look tempting enough at the $25 price point, that’s only for a trial, and the actual price is $80 for a one month supply. If you don’t call and cancel you’ll get billed for the trial, plus you’ll get sent additional product and charged for it at the normal retail price.

When you consider that you can get a three month supply of Rogaine foam for $50, and this is a formula that has been tested and retested and has a high efficacy rating among users, and contains the same active ingredient, it’s hard to justify spending an extra $63 for

The Commitment
They say that you’ll start to see results with this towards the end of the 60 days they recommend for the trial period, which seems rather convenient. You’ll also have to consider the long-term commitment because the results you get with this are not permanent, so you’ll need to keep using it as long as you want to maintain your appearance. You’re also committing to paying these prices if you continue on it for multiple months. While they do have a loyalty program that lowers the price after each consecutive purchase, their lowest price point still clocks in at several times the price of other options.

Evaluation
When considering whether to buy ScalpMed or not, it has to be the clear winner over other competing products promising similar results. In this regard they just don’t measure up, because they only make claims that are just like all the others. The product won’t do anything more spectacular than other Minoxidil products. It won’t work if you’re totally bald, it won’t work on frontal hair loss, and if you stop taking it your hair will start to fall out again. These are all features of Minoxidil use.

One aspect that might separate it from other products is that they say it won’t cause some of the side effects that are reported with other hair loss solutions. Namely they bring up the sexual side effects that have been reported with pharmaceutical drugs like Propecia. But Propecia is taken internally, is not a topical solution like ScalpMed, and does not use Minoxidil, it’s a totally different drug altogether. So the claim that you’re avoiding these types of side effects could be made by any distributor of a Minoxidil product.

ScalpMed is getting the Thumbs Down due to its inexplicable price point. Because it contains Minoxidil it will work for those that respond well to Minoxidil. But regardless of whether it works or not, it’s still many times more expensive than other products that contain the same active ingredient. For that reason there’s no need to spend through the nose to try it out and see how well you like it, you can simply buy generic forms of Minoxidil or Rogaine and conduct the same experiment.

Our Recommendation
Since it’s unclear what all of the other ingredients are, and since we know that the main ingredient is Minoxidil, it makes better sense to simply use generic Minoxidil that can be purchased rather cheaply online. You’re just not going to beat Big Pharma to the solution for hair loss, so don’t worry about being left in the dark on the newest most exciting discovery to regrow hair. When it does hit, everyone will know about it the same way everyone found out about Viagra.

What do you think? Does ScalpMed work or not?

← Previous FitBit vs. BodyBugg: Which Works Better?
⚅ back to blog
Next →Does Intelligender Really Work?