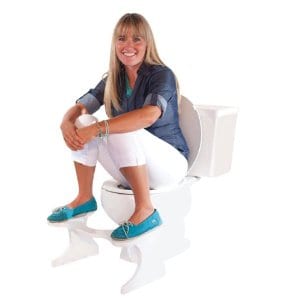 The Squatty Potty might look like an ottoman for your toilet at first glance, but it’s designed to get you in a squatting position so that you can go number two more naturally.

Overview
The idea of squatting to poop is nothing remarkably new, and many cultures across the world have public restrooms with squatter instead of toilets. It’s hard to deny that it’s a cleaner way to go as far as sharing a toilet with someone, but there are also several key benefits to squatting vs. sitting that just make sense.

It’s also easy to see that this is the way that our species was designed to relieve ourselves, and that the only reason we stopped going that way is because the use of a sitting toilet became widespread in the west. Aboriginal people all over the world go in this manner, and unless you train a young one to use a sitting toilet their natural inclination will be to squat.

The claims they make about squatting being preferable to sitting are that it will help you to not get constipated, put a stop to hemorrhoids, help prevent diseases of the colon, and help you eliminate more effectively. These claims are a little harder to prove when it comes to finding medical studies that have put it to the test, but when you consider how the colon is formed and how we’re designed to squat, it doesn’t take a large leap of faith to get on board with them.

The Hype
This can be placed under the health and wellness category, which is experiencing a boom right now since many people are looking at ways to improve their health as they get older, and all-natural ways to doing things are all the rage now. Other than that there isn’t much hype, because the claims being made are easy to verify, and it simply makes sense that this would be a more suitable way for us to use the bathroom.

The Cost
The basic model of Squatty Potty is $35, which they say is built to last so you don’t have to worry about it being made of cheap plastic that will break. You can upgrade to their classic model which is $60, or go all out and get their bamboo model which is hand made and goes for $80. Since this doesn’t involve buying an entirely new toilet, or buying a large cumbersome contraption that is hard to use or takes up most of the bathroom, it seems like a rather inexpensive way to go, no matter which stool you choose.

The Commitment
This may take some getting used to on your part, or you might take to it right away. To get the benefits you don’t actually have to squat, so you can continue to have your cheeks on the toilet and still get your knees up so that you’re getting the same benefits. If you want to work up to the point where you’re in a full squat and not touching any part of the toilet, that would be up to you and would represent the most natural way of going.

Evaluation
The Squatty Potter is not the first device created to help us get in the right position to eliminate our waste. There are specially designed toilets and toilet add-ons that have been around for several years. But Squatty is the first to successfully bring this concept to the mainstream, and the best and most concise way we’ve seen of explaining the benefits of squatting, and making a case for switching your pooping style. If you suffer from one of the conditions linked to sitting while going you owe it to yourself to at least test the method, and then get a Squatty Potty if it makes sense.

Try It Before You Buy It
It’s possible to try this theory out without buying a Squatty Potty, you simply have to find a makeshift object that can serve the purpose of raising your feet up so you’ve got the 35 degree angle they talk about. We were able to use a roller suitcase to replicate the position and found it to be very effective, producing more abundant elimination with less strain and more comfort. There’s little doubt that the Squatty Potty would provide the same results, and be easy to put out of the way after each use.

The Squatty Potty provides the best solution we’ve seen to squatting as your default position when pooping. Because of its shape, which allows it to slide out of the way when not in use it makes a great addition to your bathroom. Be sure to take the time to measure your toilet so that you order the right size, and you should be good to go. What’s nice is that you can use it the way you feel comfortable, continuing to sit if that feels right, or fully squatting once you build up the leg strength. Like any new skill it takes a bit of practice but many say it’s worth it.

Our Recommendation
We were unable to find any argument that sitting to poop is better for the body than squatting. There are some ways that make it easier to do, since it doesn’t require any extra leg muscles, and it may seem more comfortable since that’s the position you’re used to. But as far as it providing a better elimination experience there’s a consensus that squatting is the better way to go. Since it makes so much sense, and it’s a relatively inexpensive way of solving the problem, we say give it a go.

What do you think? Does Squatty Potty work or not?

← Previous Is the Keurig Vue Really Worth It?
⚅ back to blog
Next →FitBit vs. BodyBugg: Which Works Better?

62 Customer Reviews on “Does the Squatty Potty Really Work?”