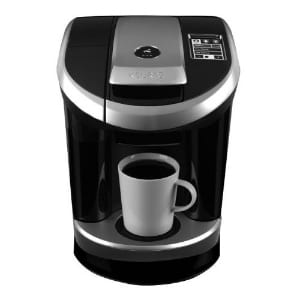 The Keurig Vue is the latest release from Keurig, a follow up to their other models, and supposedly the ultimate brewing experience. But it also comes with a hefty price tag, so let’s see if the price is justified, or if there are better options available.

Overview
The original Keurig models took over households across the country and now they’re a default item in many homes. Like any new product that hits the market, this one was good but had its share of drawbacks that were pointed out. But like any good product that makes people happy overall, it left some room for growth and development so that they could build on their success and continue to grow.

The Claim
The big claim here is that this is faster and better than the B40 and B60, with features like recyclable pods, adjustable temperature, adjustable brewing strength, and a host of cup sizes to suit most any need. One gimmicky feature is the ability to control things like air flow, timing, and water pressure, which would likely only appeal to coffee aficionados that believe they can tinker with the pods enough to make a difference to the taste of the coffee.

The Hype
It seems that most things these days are getting their own LCD touch screen, and this model is no different. This gives it the hype of looking much more futuristic than its predecessors, but also adds functionality to it that the others didn’t have. Other than that there’s not too much hype to this, but it is riding on the coattails of their previously successful line of coffee makers, so they’ll get some spillover from that.

The Cost
The Keurig Vue is twice the price of the other models you can buy, clocking in at $230. This is enough to stymie many would-be buyers, with models like the Hamilton Beach Scoop going for just $60 with nothing more to buy other than your favorite coffee. It is yet to be seen whether this device will be the Keurig killer or not, but they’re promoting it as the clear alternative for unhappy Keurig owners.

The Commitment
This is supposed to be a faster brewing experience compared to their original models, and of course it’s faster than using a traditional coffee machine. But the real comparison as far as commitment goes should really be what you’re committing to financially. With other coffee brewers you are free to choose and use your own coffee, but with this one you are committing to using their Vue cups each time you want a cup of coffee.

Evaluation
The Keurig view has some undeniable upgrades to their other offerings. The ability to brew larger cups, like travel cups, is a big improvement, and something that solves one of the complaints that people have with the limit on cup sizes on older units. Overall we’re impressed that they seem to be listening to common complaints and attempting to address the problems in their latest models. You can’t fault them for sticking to a business model that works, but sooner or later they’re going to get competition from a coffee maker that gives people everything they’re asking for.

Keurig has proven themselves in millions of homes so it’s not really a matter of whether this would work or not, because it’s simply building on a system that is battle tested. The real question is whether it’s worth upgrading from your old Keurig, or jumping into this one straight on if you’re a first timer. Our research suggests that there’s a high likelihood that you’ll be satisfied with this, if the price doesn’t scare you off and you’re a fan of the coffee produced by Keurig’s brewing partners.

The Keurig Vue is getting a Thumbs Up for doing what it says it can do, and for the improvements they made on their original models. But it’s getting a Thumbs Down for making you buy their special cups when they should have added the ability to use your own ground coffee like competing model. Considering that there’s an ongoing cost of ownership, it would make more sense for them to get you roped into it so that they’d make recurring income, but it seems they are trying to get the best of both worlds.

Our Recommendation
They’ve addressed some issues that customers have had with the other Keurig models, like not being able to recycle the used pods, the coffee not being strong enough, and the temperature not being hot enough or too hot. But there are some fundamental flaws that still exist, like being forced into buying their Vue cups at a premium price, and being limited to the brews that they produce and distribute. However, if you’re happy with the older models, and the price doesn’t deter you, you’ll likely be happy with this as well.

What do you think? Does Keurig Vue work or not?

← Previous Does the YumaLite Really Work?
⚅ back to blog
Next →Does the Squatty Potty Really Work?

2 Customer Reviews on “Is the Keurig Vue Really Worth It?”