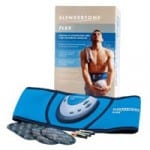 Flex Belt represents the ultimate in the lazy person’s attempt to six pack abs. Wanting to get fit without committing to a workout program is understandable, but believing in it to the point of purchasing it might be a fault.

Overview
These types of devices have been around for a long time. The more technology advances, the more consumers believe that they could possibly be effective, and affordably priced.

The Claim
Strap on the Flex Belt and let it do its thing. It will send electrical charges that will repeatedly activate your abdominal muscles, eliminating the need for you to do crunches or any other type of ab workout.

The Hype
The hype comes in the form of the promise at six pack abs by using the Flex Belt alone. This is evident in the negative consumer reviews that can be found by people that were delusional enough to think that all they had to do was use the Flex Belt and they would get six pack abs.

These kinds of products will always be around, and will probably become more and more popular in the future. Perhaps at one point there will be a machine that will work out your muscles with no effort needed, and another machine that will burn fat, and a pill that will make you lose weight. At that point everyone on the planet will look like they are pulled from a fitness magazine. That may be the future, but whether it’s a good or bad thing it’s not a current reality.

The Cost
The Flex Belt is a whopping $200 and for something that sends electrical impulses into your body you wouldn’t want to bargain shop. Common complaints are that the pads wear out quite easily, forcing you to purchase replacement pads. This would increase the cost of the device considerably, if you used it repeatedly.

The Commitment
Other than the price of the Flex Belt, all you have to do is use it as instructed and you’ll be on your way to a flat, sexy midsection.

Low-commitment weight-loss and muscle-building products usually enjoy some initial success in the market. They only need to have a shred of believability for them to be marketable. It does seem almost believable that Flex Belt could work, and this will lead many to whip out their credit card.

Evaluation
Many customers have reported at least an initial success when using Flex Belt. This is because it does do something. It will send the electrical charges into your gut and you will feel you abdominal muscles contract. It will be the same sort of feeling you get when you do a crunch or a sit up.

When you’re finished with a session, you might even feel that you did do a full set of abdominal exercises. You might even be sore the next day.

The biggest set back that most people are reporting is that they didn’t get the results promised from the ad on TV or on the website. They didn’t get a six pack from using the machine. This is because of the advertising used, and the false expectations it creates.

Getting a six pack requires extremely low levels of body fat. In almost all cases there likely is a perfectly formed six pack residing under a beer gut.

It doesn’t not work, it just doesn’t work to the level that people expect, and isn’t a substitute for natural exercises like crunches, sit-ups, and other training.

Our Recommendation
The Flex Belt will not help you lose weight, and most people already have a well-defined abdominal wall. The problem is you can’t see it through the layer of fat in the way. Since it doesn’t help you burn fat you won’t see any progress unless you combine it with aerobic exercise and a healthy diet.

The type of person that would be interested in shocking their abs into submission probably doesn’t have the sort of will power to stick to a diet and exercise regiment rigorous to get down to the 8% body fat or lower that it takes to get a visible six pack. Learn to love the abs you have, and rid yourself of the unrealistic goal of having six pack abs.

Best Alternative to the Flex Belt: The Diet Solution Program

What do you think? Does the Flex Belt really work?

← Previous Does Creatine Really Work?
⚅ back to blog
Next →Does magicJack Work? How Does it Actually Work?

61 Customer Reviews on “Does the Flex Belt Really Work to Get a Flat Tummy?”