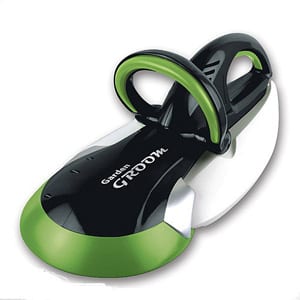 The Garden Groom promises that you’ll save time with your yard work because it cleans as it goes along. One of the drawbacks to tidying up the yard is that you usually end up making a big mess in the process, and then spend the rest of the afternoon cleaning it all up. This trimmer collects your yard waste as you use it, so when you’re done, you’re done. But how well does it actually work at preventing a mess, and making your yard look great?

Overview
Perhaps if doing yard work wasn’t such a chore, we’d do it more often, or enjoy doing it when we have to. That’s the promise of these self cleaning tools. By reducing the amount of time you have to spend tackling the same problem again and again of cleaning up after your trimming session, you should be able to get it down to just one step and be done with it. A product like this would definitely be great, and would make a lot of people rush to order. But we all know that there is a big gap between making promises and living up to them.

The Claim
The Garden Groom claims that they are the only gardening tools in the world that collect their own yard waste. By cleaning as you they say you eliminate clean up time altogether. And because it doesn’t weigh very much, you can use it longer without getting tired, and it’s so versatile that and use it for many different projects, making men each year.

They say that it produces 10 times less waste than what you’re normal methods produce, due to the fact that it grinds up the clippings as it works. They also claim that you don’t need to be an experienced gardener in order to use any of their products. The blade is shielded, so it is very safe to use, and it includes a bag for all of the clippings to go in, so it’s pretty foolproof.

They say that this provides the added benefits of not having to then so much to pick up all of your yard clippings, no more trying to break them up, or bag them up. As is because their trimmer not only cuts up twigs and leaves, but it shreds them and collects them its own bag so it’s all just one step. They talk up their 300 Watt motor, but that is the same power as the Big Boss Blender so it can’t be incredibly strong. They also say that you’ll be able to avoid having to hire professional landscapers, because anyone can use this to make their yard and look ready for Better Homes & Gardens magazine.

The Cost
Garden Groom is $130, but they break it down for you in payments of $33 for three months, and they put the $30 shipping charge on your first payment.

The Commitment
Compared to using regular hedge clippers, this should represent a much easier and faster way to get your yard work done and also should reduce or do away with having to clean up after yourself when you’re done.

Evaluation
There are a total of four different products that the Garden Groom company produces. Like many companies out there after they had success with their original models they are now expending their line of products to take into account other jobs will need to get done around the yard.

Garden Groom Midi – This was one of their original products, and led to their initial success. This is your basic hedge clipper, but with a few adjustments that make it better than anything else you probably have used. The first is that they put a safety On the blade so that you don’t have to worry about it so much. They also introduced the idea of sucking up your hedge clippings as you go along.

Pro – This is the same exact model as the Midi, but bigger and more powerful so you can take on larger jobs. It still has all the same features like the protected blade, and cleaning up as you trim.

Versa Trim – This gets its name from being versatile, and it says it has three functions. It can work as an edger, a weedwhacker, and also a hedge trimmer. It has the same safety functions expected to have, and also sucks up your trimmings as you clip them.

Garden Barber – This is when you want to get into head sculpting like Edward Scissorhands. It lets you get detailed, and is also battery-powered so you can pretty much take it all around your yard and get shrubs of all sizes.

Garden Groom family of products seems to be a big letdown. People have noted that you have to go over the same spot many times just to get it to clip it down enough. Even small jobs that you think you would be able to handle present a problem for it. Although the concept is nice, the follow-through just doesn’t deliver. We’d all love a garden tool that cleans up after itself, but we’ll have to wait for the next company that gives it a try.

Our Recommendation
There’s not really any other hedge clippers out there making the same sort of claims as Garden Groom does so there’s not really anything that we can recommend taking place. For the time being, just go with your current method for trimming your hedges, and will keep our eye out for the next best self-cleaning hedge clipper to come along.

What do you think? Does Garden Groom work or not?

← Previous Does the Ruff Wear Harness Really Work?
⚅ back to blog
Next →Does the Chef’s Choice 810 Gourmet Egg Cooker Really Work?