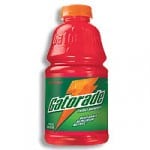 Perhaps you’ve seen row after row of the rainbow assortment of Gatorade in the beverage aisle and wondered if it actually works. It’s been around for over 40 years now and is a mainstay in the American marketplace. It’s a staple to almost every professional and collegiate sporting event and dumping Gatorade over a winning coaches head is a tradition that seems to date back for several generations.

Overview
Gatorade still enjoys a reputation for having an effect on athletes, and allowing them to endure during strenuous activity, such as playing sports on a professional level.

The Claim
Gatorade replaces the electrolytes that your body loses when you exercise, allowing you to last longer on the playing field, or on the court. The claim is not made as much anymore because it is understood by the mainstream consumer that this is what Gatorade does.

The Hype
Because of an intense amount of advertising, including product placement and celebrity endorsements, many have come to believe that Gatorade really does what it claims.

Professional athletes do a lot more than drink Gatorade (if we’re to believe that’s what’s actually in the Gatorade bottles you see at game time). They consume a lot of high-quality foods and work out under the direct supervision of personal trainers and fitness coaches. They also take in a lot of supplements that allow them to push it to the max and best their opponents.

The hype enters in when a weekend warrior sees his idol drinking what appears to be Gatorade from a squeeze bottle with a big logo on it. He or she then makes the incorrect assumption that if Tiger Woods or Lebron James or Jerry Rice or Derek Jeter drinks Gatorade, then it must be what gives them their edge.

It’s total hype. It’s just a carry-over from properly delivered marketing that touts that Gatorade was made by scientists in order to help the University of Florida Gators last longer in the Florida heat. While this may have been true, it’s not an apples to apples comparison because what is called Gatorade nowadays, is hardly comparable to what it first was.

The Cost
Gatorade competes with all of the other beverage options that consumers have when they want to drink something besides water. Therefore the cost of Gatorade is competitive and not unusually high. You can usually obtain an individual-sized bottle for around a dollar, or more if you buy it from convenience stores.

The Commitment
All you’re required to do is drink Gatorade and your body will be renewed by the electrolytes it contains in it.

Evaluation
Gatorade first came out back in the late sixties, when products were made with real ingredients. These days, giant multinational corporations like PepsiCo will put just about anything into foods and drinks in order to keep their manufacturing costs down.

Gatorade may have originally worked in it’s earliest form when it allegedly helped the Florida Gators win their first Orange Bowl in 1967. The product that exists today is nothing like the original, and has few, if any, health benefits. It’s not as bad for you as cola, but it contains large amounts of sugar. Before everyone figured out how bad high fructose corn syrup is, Gatorade used to contain it as its third ingredient, right after regular old sucrose syrup.

You can bet that they still put things in Gatorade that are just as bad for you as HFCS, but that the public isn’t yet aware of.

No, Gatorade does not work and it’s likely it hasn’t worked ever since the 70’s when it was mass produced and got its first licensing agreement with the NFL.

Our Recommendation
When you’re thirsty drink water. There’s nothing in Gatorade that will help you be any healthier. You’re not Michael Jordan and you’re not trying to win any championships. The sodium in Gatorade will only end up making you thirstier, and you’ll end up drinking water eventually.

What do you think? Does Gatorade really work?