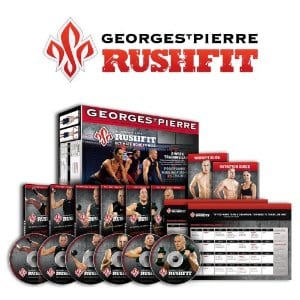 RUSHFIT is the brainchild of Georges St-Pierre and his trainer. It says that it can get your MMA fighter fit in just 2 months time with a combination of high intensity training, nutrition, and a clear plan. But can you really get as fit as this UFC champion by following what he says?

Overview
It’s hard to deny that many MMA fighters have enviable bodies. They spend all day training to get them. They’re usually pretty cut, with 6 packs being the norm, and visible muscles all over, including well developed traps, pecs, and upper arms. It’s easy to understand why they’re so fit, since they have to stay within their weight class, and since they spend most of their days being active instead of sedentary, but does being a champion fighter make you a good fitness instructor?

The Claim
GSP says that after just 8 weeks on RUSHFIT you will start to look like you could actually take on an MMA opponent in the ring. They say you’ll build muscle, drop the pounds, and get in overall shape.

The Hype
The hype comes from St-Pierre being the current champ of the UFC’s welterweight division. He’s riding high on his success, which gives this product a lot of credibility. After all, there are hundreds of MMA fighters all over the world, but only a handful can call themselves UFC champions, either current or former.

The Cost
RUSHFIT is $90 and you can pay it all at once or break it up into 3 installments of $30. We say break it up because it’s the same price either way, and with the guarantee in place you can get in for just $30 and only make your 2nd payment if you like it, but still have time to keep evaluating it.

It comes with a full 60 days to try it out, which is nice because they say that this is the amount of time it takes to see real results if you follow along as directed.

The Commitment
You don’t have to commit yourself to getting in the ring with anyone, but you definitely have to have a strong dedication to getting fit if you want to come out of the 8 weeks looking like a fighter. This includes sticking to a simplified meal plan, and following the outlined schedules to the letter. 8 weeks is not very long in the grand scheme of things, so be sure to get this when you don’t have any big commitments coming up that will throw you off course. We recommend getting serious about it. Buy some training gloves and suit up as if you’re a real MMA fighter. It adds to the fun and can help keep you motivated.

Evaluation
Most of the time when you see a celebrity athlete coming out with a workout program the big concern is you are getting third hand information. The trainer tells them what to do and then they tell you. But with RUSHFIT they’ve got GSP’s trainer, Erik Owings, instructing you as well, so you’re getting authentic advice right from the source. This is a comprehensive course, and you should be able to get started with it right when it arrives. You do need to have some dumbbells in order to use it, but these can be had relatively cheaply at most sporting good shops or online.

Looks Only
It’s important to note that this is not an MMA training video. There are other DVD sets out there that get into the actual training of the different styles, but this is geared at getting you fit, and getting you to look like an MMA fighter. If you were interested in learning how to fight, either for self defense, or possibly getting into this as a sport, you should go with a different program.

We’re giving RUSHFIT our Thumbs Up review, and not just because GSP could beat us up if we gave him the Thumbs Down. The guy obviously knows how to train for success, and the exercises he has in this program will definitely challenge you. It’s simply a matter of resolving yourself to stick with it long enough to see the results.

Our Recommendation
We’re all looking for that one fitness program that can keep us motivated and get us to come back again and again and press the Play button. It’s not every day that you can get instructed by a real champion, and that thought alone is enough to keep most people on track. But it’s also the fun aspect as well. Yes, some of the workouts here are grueling, but just knowing that these are the same types of exercises that MMA fighters do is enough of a novelty so you stick with it.

What do you think? Does Georges St-Pierre’s RUSHFIT work or not?

← Previous Does the Socrates WordPress Theme Really Increase Revenue?
⚅ back to blog
Next →Does Calorad MG Really Work?