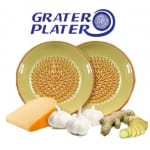 Traditional graters are notorious for taking off some skin, and many people have been waiting for a product like Grater Plater. If you’ve ever grated a part of your finger off when trying to get that last nub of cheese to give up its shape, you’ve wanted to find a product like this one that is safe and actually works. So is this the one?

Overview
Anyone who winces at the site of someone grating cheese or chocolate using a traditional grater has no doubt been the victim of shaven fingertips. The fingers are so sensitive that it really hurts when they get in harm’s way.

A traditional grater has several flaws and has been a target for enterprising inventors for many decades now. There always seems to be a that comes out trying to save cooks and chefs from scraping their knuckles against a standard grater.

People still buy the traditional models though, because nothing has come along to date that can do all that it can while producing quality results that make meals look and taste good.

The Claim
Grater Plater and other products that are just like it claim that you can grate all sorts of things on it without using a traditional grater. It’s completely pain free and you can rub your fingertips across the grating area without coming into harm.

The Hype
The hype is justified for any chef that has used a traditional grater. What a pain, literally and figuratively. You run the risk of cutting some of your hand, and clean up is a pain.

The Cost
You can pick this up for a song, which makes it really easy just to grab it. If you don’t use it oh well, and if you do use it you’ll be pleasantly surprised by how well it grates up things like cheese and chocolate, without shaving off parts of your fingertips.

You can pick up the actual Grater Plater or a similar knock off for $10 or less. Just get it. It doesn’t merit any more hemming or hawing.

The Commitment
By using the Grater Plater you’ll be replacing a traditional stainless steel grating unit, so it requires no less commitment than you would normally give to a kitchen appliance. It can actually make your work more easy, because it is more versatile than a regular box-style grater. It’s not as clumsy, and it’s easier to clean so you might actually end up saving some time.

Evaluation
Minced garlic is relatively easy, but Grater Plater doesn’t really make good lemon zest. It works well with ginger, and does a great job grating cheese. It doesn’t shred like a normal grater would, it minces most everything it comes into contact with. This can be good if you want some grated Parmesan on your spaghetti, but bad if want some shredded cheese for your pizza.

Also depending on whether you want carrots minced up for a carrot cake, or shredded for a salad, you’ll want to choose a traditional grater for the latter.

It works for some things, but not for others. It’s handy to have around the kitchen as an alternative to traditional graters for some foods like chocolate, veggies, and cheeses. When you need something shredded you can use another gadget that specializes in shredding.

Take the plunge on this one because it doesn’t even cost as much as a few cups of coffee at a cafe, and it’s built to last. It’s something you can keep in the kitchen and only use a few times a year and it will still be worth it if it saves you from having to use a Band-Aid after you’re done.

What do you think? Does Grater Plater really work?