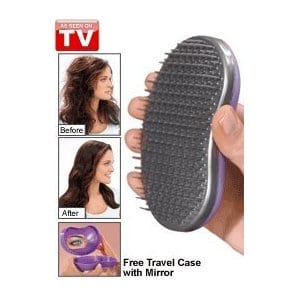 Since it’s shaped like a bean they called it the Hair Bean and then called it a day at the branding office. But you can’t fault them, because it is a catchy name, and nothing else was used the name in the past. This is a hair brush that is supposed to work wonders on tangles and unruly hair. But can it possibly live up to all of the positive buzz that’s been surrounding it, or the fall short of expectations?

Overview
Not all of us were blessed with perfect locks that are photo ready right when you jump out of bed. For many of us it requires a daily resurrection from crazy mop head to manageable hair. Inevitably, we end up having a bad hair day every once in a while, some days are worse than others, and can present this with tangles and snags in our hair that are really hard to get rid of using normal brushes and combs.

The Claim
The Hair Bean says it can detangle your hair without pulling it out or causing any damage to it. They claim that it works on all sorts of hair, and that it actually has technology that makes it gentle. They also say that it is ergonomic and is nice to hold on to. They really don’t make a lot of outlandish claims like some products do, or say that it can do 5 things, which is rather refreshing. It has one use, and one basic claim, and does its best to live up to it.

Why Does Hair Get Tangled?
Hair gets tangled for any number of reasons, and it doesn’t necessarily mean that you’re not taking proper care of your hair, is just something that comes with certain hair types. For example if you have a head full of a lot of fine hair it will have a greater tendency to get tangled then other types. If you have naturally curly hair, the curls tend to work to prevent snags and tangles, but they can still happen. If you usually wear loose hairstyles, you might want to think about keeping your hair up, or in a ponytail so as to prevent it from getting so many tangles.

The Hype
The hype comes from the overwhelming number of people are saying that this works, and the fact that many of us have the painful experience of having our hair yanked, and yanked out because of tangles, and conventional brushes. Most of us don’t have the time necessary to do 100 strokes a day like Marcia Brady, so we need something that can work quickly and effectively and getting our hair ready every day.

The Cost
The Hair Bean can be found at Amazon for around $15, but you can find it in retail stores for $10. Not bad for what you’re getting here, and many other companies would have charged twice as much for it.

The Commitment
This should represent a decrease in the time it takes to get through your hair, either in the morning, or any other time it gets unruly. However, you might find that you want to brush your hair more often than you did before, so it could wind up being a breakeven, but in a good way, and with your hair looking better than it has before.

Evaluation
We’re pretty happy with the Hair Bean, it gets the tangles out without pulling the hair too much, it does pull it a bit, but not to the point of pulling it out or getting snagged on a tangle. We’re not the only one that tested it and liked it. There are plenty of other real world tests that have shown that this does in fact work, and works like a charm. See what our tested had to say about it as she demonstrates how she uses it:

It’s not every day that you see a product like this that actually makes believable claims and then follows up on them. They say that it uses a sort of memory technology, and were not quite sure what that entails, but as long as it produces results, it doesn’t really matter how it gets them. Perhaps they put a bit of memory foam in the unit itself, so that the contours to the shape of your head. Whatever they did, it worked, and this is something that should be in everyone’s hair styling toolkit.

The Hair Bean is one of those products that lives up to its claims and gives Made for TV products a good name. We’re giving it the Thumbs Up review and recommended if you’ve got fine hair. This also seems to work great for kids, who are notorious for whining about getting their hair tugged on when they have a tangle.

What do you think? Does Hair Bean work or not?

← Previous Does the Black Out Stamp Really Work?
⚅ back to blog
Next →Does the Ab Roller Evolution Really Work Your Core?