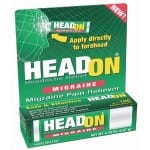 HeadOn definitely works at creating the world’s most annoying commercials. But does it work at reducing the pain felt by a headache, the way it claims it does? It seems like an outside in sort of approach to relieving pain in the head.

Overview
It could be said that HeadOn ads are meant to cause headaches, and their product is designed to take them away. Anyone that gets a regular headache is desperate for a reliable and quick fix, and that’s the draw to using something like HeadOn.

The Claim
In a startling bit of irony, HeadOn doesn’t actually make any claims at all during its commercial. The claim that it takes away a headache is entirely assumed by the view. All they do is repeat the instruction to apply it directly to your forehead. That’s all they say.

This is rather clever, and most assuredly the ad rep that came up with this promo piece was laughed out of the office at first. But then they probably thought about it more, did some trials with test audiences, measured their feedback, and realized that you don’t actually have to make any claims at all, that people will just assume that’s what it’s for.

The Hype
Anyone that watches the commercial will be annoyed by it, but also intrigued on a fundamental level. The ads are so notorious that they considered an Internet meme, and have basically gone viral. Almost everyone has some frame of reference if you bring up the famous tagline.

Genius marketing, but unfortunately for those that spent money on it, a waste of a product.

The Cost
HeadOn is moderately priced, which takes down the price barrier that most people put up when considering a new product. By putting itself easily within the reach of most buyers, they figure there’s nothing stopping people from at least giving it a try.

The Commitment
The big draw to HeadOn is that you don’t have to do much. You don’t have to pop pills, and you don’t have to change your lifestyle at all. This is the king of quick fixes, and will attract those people that just want to alleviate their symptoms and move on with their lives, without giving much thought as to why their head is hurting.

Evaluation
You would think that with a product like HeadOn, that it would rely on repeat business in order to stay afloat. If it didn’t work they would eventually run out of new customers, as people try it, get disappointed, and move on to the next big thing.

Respected scientists as well as consumer advocates have come forward to show that HeadOn is merely a placebo type product, and the only success stories possible are from those that expected the product to work, and believed so fully in it that they willed the headache away. While this does show the unbelievably awesome power of the human mind, it does nothing for the power of HeadOn.

HeadOn has basically been proven to be a big scam. The active ingredients in it have been shown to exist is such infinitesimal levels that they couldn’t have any effect, especially considering that they’d have to penetrate the skin of the forehead in order to do anything internally.

Furthermore, the bulk of the product is just wax, so in essence you are just balming up your forehead. You’ll probably get some zits for your troubles if you’re prone to clogged pores and acne.

Our Recommendation
Avoid HeadOn and don’t get drawn in by their repetitive advertisements. Treat the cause of your headache, not the symptom of pain. If it’s stress induced, try to find ways of dealing with your stress that don’t involve quick fixes like HeadOn. If you don’t treat the cause you’ll just fall victim to product after product that promises you hope, without delivering any relief.

Recurring headaches could also be the sign of more serious conditions, so be sure to consult your doctor if you get chronic headaches, migraines, or other pains in the body.

What do you think? Does HeadOn really work?

← Previous Does Kettlenetics Really Work?
⚅ back to blog
Next →Does the Showtime Petite Rotisserie Really Work?