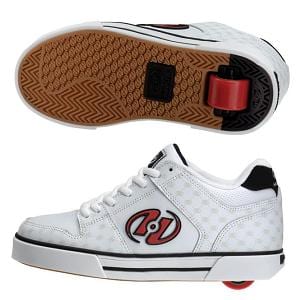 If you’ve ever seen a kid roll by on a pair of Heelys, you probably wondered how they do that without breaking their neck. These are basically shows that are outfitted with one old school roller skate type of wheel in them. By picking up the front of your foot a user is supposed to be able to glide around on this wheel, and adept users can make it look effortless.

Overview
It was only a matter of time before someone put a wheel on the heel, and Roger Adams beat everyone to it over a decade ago. But the invention could have gone either way. If people tried these out and couldn’t get them to work, it would have been a huge flop. But the proof that they do work is shown as soon as you see someone cruise by on a pair of these as if they are floating. It’s really neat to see it in action, but can take a lot of practice if you’ve never worn a pair.

The Hype
These were all the rage a few years back, and they still have some hype surrounding them because many people consider it a form of skating and there are even schools that ban them, so it is getting some press, and as they say, all press is good press. It’s also got a viral sort of quality to it, in that once you see someone use them, you want to try it too, which fuels its success.

The Cost
Heelys come in a vast array of styles, with different features as well. Some have two wheels while most have one. You can expect to pay more for more advanced styles and features. A basic style with standard features will run you around $50 or $60, which makes them more expensive than a standard pair of similar style shoes, but less expensive than a pair of typical rollerblades.

The Learning Curve
If you’re used to skateboarding, roller skating, or rollerblading, you’ll probably have an easier time with this, and be used to the feeling of not having stable footing. If you’ve never tried any of these other activities, you’ll probably wind up on your backside a few times before you get the hang of it. The accident rate with these suggests that if you can get past your first five times without an accident you’ll probably avoid them altogether.

Evaluation
For parents, Heelys might seem like a hospital visit waiting to happen. For kids, it represents a way to incorporate some fun into mundane daily tasks. A trip to the supermarket is more fun when you can glide along their linoleum covered aisles. Walking to school is less dreadful when you can roll halfway there. Also, it could just be a case of keeping up with your friends if they all have a pair and you’re the last one that doesn’t.

Pulling Off Tricks
Like with anything that can be mastered, there are those that are really awesome with their Heelys on. They can use them like a pair of rollerblades or a skateboard and can pull of tricks and maneuvers at a skate park. You don’t have to get that involved with it, if you just want to use them to cruise around when you can, but it’s nice to know that you have the option to take it as far as you want to go.

Avoiding Injury
You definitely don’t want to hurt yourself, so it might be a good idea to wear some type of padding to protect yourself from injury, as least until you get good at it. A helmet would be overkill, but elbow pads and gloves would be good to protect from scratching or scraping yourself up if you take a good fall. It’s not too incredibly hard to stop, all you have to do is press back with your heel so that the back of your shoe scrapes on the ground. But even still, some people have trouble maintaining an upright stance with these one.

Heelys are the originator and are even patented for their design. Of course there are knock offs out there that look just like these, but if you want the authentic experience and a quality product you should get an official pair. They’re not that much more than the cheaper fakes, and you’ll be able to get better customer service if you ever have any problems with them.

Our Recommendation
These can be a lot of fun if you take the time to practice and get good with them. If you don’t stick with it though, they will just end up collecting dust in your closet because you’ll opt for a regular pair of shoes instead of having to mess with taking the wheel on and off.

What do you think? Does Heelys work or not?

← Previous Are Keen Psychic Readings Really Accurate?
⚅ back to blog
Next →Does GameFly Really Work?