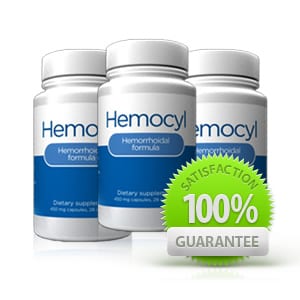 Hemocyl is an all-natural alternative to many of the prescription drug treatments for hemorrhoids out there. They say that just by popping two pills once a day for one to two weeks you’ll be able to knock out your hemorrhoids for 6 months. That’s enough for just about anyone to say “sign me up!” but can it really work this well, are there any side effects, and is the price right? Let’s find out.

Overview
Finding a workable solution and treatment for your hemorrhoids is important. If you let them progress too far, you could wind up needing surgery to have them removed. That’s why it’s a good idea to overcome the pain and embarrassment early, and treat them at the first signs of discomfort. Because of the embarrassing location many people are reluctant to seek treatment until it’s too late. While this isn’t a life-threatening condition, it can put a strain on your social life, as well as your personal life, so it’s good to be looking at your different options.

The Claim
Their most convincing claim is that there was a “significant improvement or complete regression of all symptoms in over 90% of users.” That’s enough to instill hope in just about any hemorrhoid sufferer, which contrary to what you might have thought, there are actually a large number of people suffering along with you. In fact, the makers of Hemocyl cite that 66% of everyone on the planet will get hemorrhoids to some degree at some point in their life.

They also say that it happens to both genders, but that it is more common with people that spend a long time sitting or standing. So unless you spend your days lying down, you’re apparently prone to getting hemorrhoids.

They say that they help ease the pain that is caused by hemorrhoids so you won’t have to take so many trips to the bathroom, and you won’t be put in those awkward social situations where you’re squirming because the desire to itch yourself is so overwhelming. They say that their product is easy to use, and that you can use it anywhere.

The Hype
They cite a lot of doctor approval and clinical studies, and toss around a lot of percentages like 95% of trial patients found this to be an effective cure. Only the makers of Hemocyl know whether or not these studies provide significant data, and how much the doctors were paid to give it the nod.

The Cost
This is from a UK-based company and they sell their product in British Pounds at 65 quid. At the time of this writing a bottle was going for USD $105, with about $16 for shipping to the USA. They are quick to point out that one bottle should last you 6 months, so this $105 doesn’t represent a monthly cost. It boils down to about $20 a month including shipping, if you want to compare it to other hemorrhoid treatments that come in one month supplies.

One thing we like about the price is that they offer a 90 day money back guarantee. This is plenty of time for you to take the product for the recommended two week period and then monitor your results for almost a full three months. Then and only then should you decide whether or not it was worth it. They full concede that you may have a hemorrhoid condition that has progressed too far for them to help, and they don’t expect you to pay for their product if that turns out to be the case. You can even send back an empty bottle.

The Commitment
The big draw to Hemocyl is its lack of commitment on your part. Pop two pills in the morning for 2 weeks and you’re set for 6 months. It almost sounds too good to be true. They specifically state that you won’t need to use things like creams, wipes, or pillows any more. If you’re tired of the hassle and inconvenience of other treatments, this will probably be their biggest selling feature.

Evaluation
One of the ingredients in Hemocyl is Azadirachta indic, an herb that is used for providing relief for hemorrhoid symptoms with its numbing action. Another ingredient is Berberine, which has been used to calm digestive problems. Mesua ferrea is the third active ingredient, and have been known to help specifically with bleeding hemorrhoids. When you put the three together they supposedly work in conjunction with each other to numb the area which reduces the pain, sooth the digestive system, and stop the bleeding that sometimes occurs with advanced cases.

One thing they got wrong is that they say because it’s a 100% natural formula it’s completely safe to use with no side effects. Just because a product uses all-natural ingredients does not mean that it is totally safe to use. People show adverse reactions to all sorts of ingredients, especially when they are extracts and are used in high concentrations. While there is a lesser chance of having a reaction from this product, there is still a chance, so you should monitor how you feel when you start taking this and note any changes.

Hemocyl is getting our Thumbs Up rating, but you have to remember that it might not work for your specific case. However, with their money back guarantee in place, we’re confident that it will either work for you, or you’ll be out the $16 in shipping which is a pretty good gamble for something that could potentially give you months of relief.

The reason we are giving it the go ahead is that users have said it’s fast and have gotten relief within a week of using it. It also appears that it works for the majority of people. We like that it’s no-mess and no-fuss and you don’t have to get all intimate with the area in question, you treat it from the inside with all-natural ingredients.

Our Recommendation
We recommend trying it, and putting it to the test. Just make sure that you cease all other hemorrhoid treatments, because Hemocyl is designed to be used alone, and doesn’t require any assistance. You also want to be sure that it is the Hemocyl that is working, and not some other product.

What do you think? Does Hemocyl work or not?