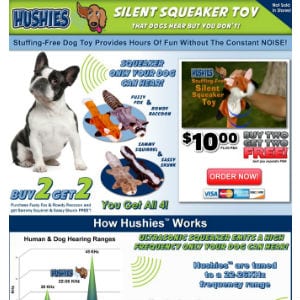 Hushies are a squeak toy that doesn’t actually squeak, at least not to our ears. But dogs are supposed to love it, so you can give it to them and not have to worry about being driven insane. That is if it actually works, so let’s find out.

Overview
When it comes to dog toys there are a few problems that dog owners typically run into. First, there doesn’t seem to be a toy that exists that a dog can’t chew through in a matter of minutes, especially if your dog is a chewer. So it seems most dog toys are very disposable, which is a shame because they do cost money, so you want to get some value for the money you’re spending.

The Claim
The makers of Hushies claim that they’ve incorporated a squeaking mechanism that only dogs can hear. They say that no matter how hard your dog pulls and bites at this it won’t rip, and if it does, there’s no stuffing inside so they won’t try to eat the stuffing and you won’t have to clean it up.

The Hype
Pet products are pretty easy to sell, and don’t need much hype, since pet owners want to give their pets the best experience possible. Here they simply show how annoying a squeaky dog toy is, and how stuffed toys end up getting shredded in due time. This is not an exaggeration, that’s what really happens to toys dogs get ahold of.

The Cost
They say you end up getting four Hushies for $24, That’s $10 plus $7 shipping plus an extra $7 shipping for the “free” ones. But it’s not bad that you get four of them for this price, since that boils down to just $6 each.

The Commitment
Since this is using a sound that only dogs can hear this should be less of a headache on your part, because your dog can chew away on the toy and you won’t be bothered by the incessant squeak of a squeak toy. It’s also relatively cheap and you’re getting a pretty good supply of them with this offer, so you might be good on dog toys for awhile.

Evaluation
The Hushies concept is a great one, and it’s amazing that no one else thought about this before. One thing that people will wonder about is whether the toy actually does squeak for dogs to hear it, since there’s no way to prove that it does or it doesn’t. But if you’ll watch your dog’s reaction to it you’ll know that it’s making a sound for them because they’ll get into it the same way they’ll get into a squeak toy.

You basically have to consider your other options here. More than likely you’ve already bought a long line of dog toys, and for whatever reason they didn’t quite work out, and now you’re back in the market for more dog toys. Wouldn’t it be nice if there was a toy that could make it so you don’t have to go dog toy shopping for a while? It’s not as if there will ever be one dog toy forever, but it would be nice to be able to get your dog something that they enjoy, and that they can enjoy day after day without ripping it to shreds. Keep in mind that if your dog is an aggressive chewer and gnawer there’s basically not much you can do, they’re going to destroy anything you give them for longer than a few minutes.

That’s one way to know whether or not your dog will enjoy this. If they already love squeaking toys, to the point where you’re ready to take their toy away from them and destroy it, they’ll love this as well, and you’ll be happy since you won’t hear a thing.

Hushies are getting our Thumbs Up rating, since they’re taking a proven winner, the Crazy Critter, and adding an ultrasonic squeak to it so that your dog stays interested. This is better than dozens of different squeak toys on the market, because it doesn’t make a shrill obnoxious noise when your dog plays with it, and it’s not made of rubber that your dog will chew through quickly, and it doesn’t have stuffing so they’re not going to make a huge mess even if they manage to tear it at the seams.

Our Recommendation
This is recommended for dog owners that know that their pets prefer squeak toys to ordinary toys. Because this is durable and doesn’t contain stuffing your dog can chew on it for far longer than most dog toys. And since it’s quiet you won’t mind if they play with it for long periods of time. Just be sure they don’t get bored with it by limiting their time with it so it stays a novelty.

What do you think? Do Hushies work or not?

← Previous Does the Forever Lighter Really Work?
⚅ back to blog
Next →Does the Perfect Pet Mat Really Work?